Around 13 times per century, Mercury passes between Earth and the sun in a rare astronomical event known as a planetary transit. The 2016 Mercury transit occurred on May 9, between roughly 7:12 a.m. and 2:42 p.m. EDT. Credit: NASA/SDO

On May 9, 2016, Mercury passed directly between the sun and Earth. This event – which happens about 13 times each century – is called a transit. NASA’s Solar Dynamics Observatory (SDO) studies the sun 24/7 and captured the entire seven-and-a-half-hour event. This composite image of Mercury’s journey across the sun was created with visible-light images from the Helioseismic and Magnetic Imager on SDO: 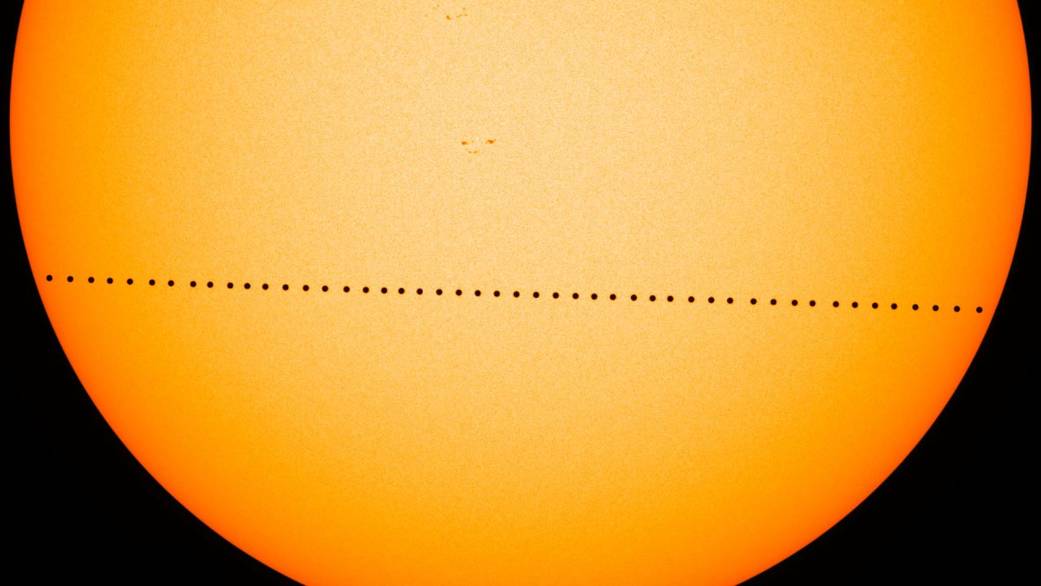 Although Mercury zooms around the sun every 88 days, Earth, the sun and Mercury rarely align. And because Mercury orbits in a plane that is tilted from Earth’s orbit, it usually moves above or below our line of sight to the sun. As a result, Mercury transits occur only about 13 times a century.

Transits provide a great opportunity to study the way planets and stars move in space – information that has been used throughout the ages to better understand the solar system and which still helps scientists today calibrate their instruments. Three of NASA’s solar telescopes will watch the transit for just that reason.

Mercury is too small to see without magnification, but it can be seen with a telescope or binoculars. These must be outfitted with a solar filter as you can’t safely look at the sun directly.

“Astronomers get excited when any two things come close to each other in the heavens,” said Louis Mayo, program manager at NASA’s Goddard Space Flight Center in Greenbelt, Maryland. “This is a big deal for us.”

Mercury transits have been key to helping astronomers throughout history: In 1631, astronomers first observed a Mercury transit. Those observations allowed astronomers to measure the apparent size of Mercury’s disk, as well as help them estimate the distance from Earth to the sun.

“Back in 1631, astronomers were only doing visual observations on very small telescopes by today’s standards,” said Mayo.

Since then, technological advancements have allowed us to study the sun and planetary transits in greater detail. In return, transits allow us to test our spacecraft and instruments.