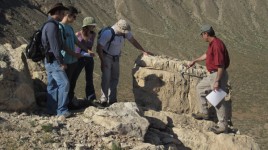 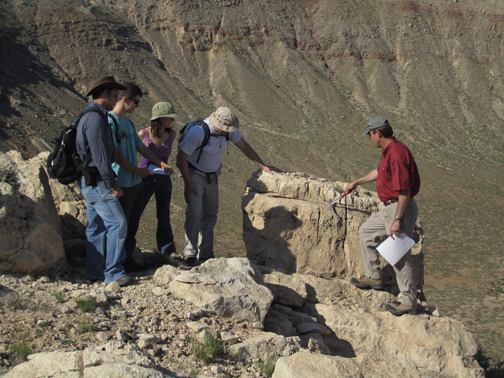 Meteor Crater serves as a “teachable moment” in geological time. Shown here are graduate students taking part in a 2011 field training program at the crater. Students are introduced to impact cratering processes. Skills developed during field camp are designed to prepare students for their own thesis studies in impact cratered terrains, be it on the Earth, the Moon, Mars, or some other solar system planetary surface. CREDIT: LPI Center for Lunar Science and Exploration/Joshua Garber.

The Barringer meteorite crater — known popularly as “Meteor Crater” — near Winslow, Ariz., was formed some 50,000 years ago in the flat-lying sedimentary rocks of the Southern Colorado Plateau in Arizona. Now, scientists are using the crater to study mysteries near and far.

This geological feature is considered a prime example of a young, well-preserved and well-documented simple impact crater.

That means it represents one of the most common morphological features on planetary surfaces, both on Earth, and elsewhere in our solar system. Scientists are using this crater to probe not just our own planetary history, but the mechanics of space rock impacts throughout the universe.

Meteor Crater is one of very few impact sites on our planet where the geologic details of crater excavation and ejecta emplacement are preserved. While the outline of most simple craters is circular, the shape of Arizona’s Meteor Crater strongly deviates from a circle and resembles a quadrangle.

The crater is roughly 0.75 miles (1.2 kilometers) in diameter. That giant hole in the ground has a rim that rises up to 196 feet (60 meters) above the surrounding landscape. The crater floor falls to a depth of 590 feet (180 meters).

The upper crater walls have average slopes of 40 to 50 degrees, although they also include vertical to near-vertical cliffs. The rock ejected from the crater forms a debris blanket that slopes away from the crater rim out to a distance of 0.6 miles (1 km).

This impact crater is viewed as a treasured scientific site, not only here on Earth but in shaping future moon and Mars exploration plans. It has become a training ground for astronauts and robot hardware as well as a learning lab for planetary geologists who are investigating impact cratered terrains on other planets.

“When a cosmic interloper slammed into Earth tens of thousands of years ago, more than 175 million metric tons of rock were excavated and deposited on the crater rim and the surrounding terrain in a matter of a few seconds,” said David Kring, NLSI’s senior staff scientist and geologist at the Lunar and Planetary Institute in Houston.

Kring has been engaged in studies of the crater for decades. He uses the site as a teaching tool for students, as well as a locale for honing the exploration skills to lunge beyond Earth.

“Those rocks and the processes they record remain the focus of our studies next year,” Kring said. “At the same time, we will conduct training activities that are designed to enhance the success of exploration of the moon and planetary surfaces throughout the solar system.”

There are a lot of activities at the crater, Kring said. He made two trips there in October alone, he added. 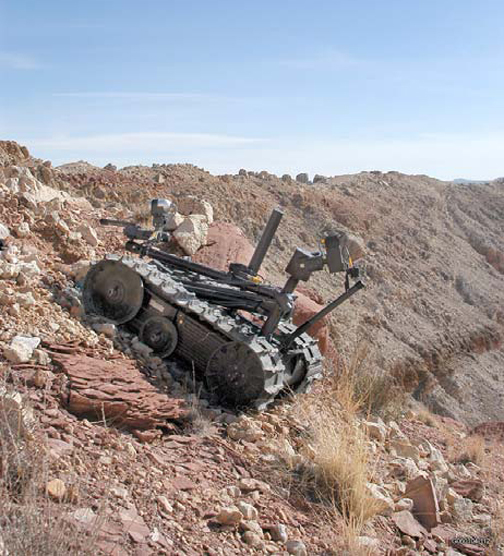 Field mobility test at Meteor Crater of a terrestrial precursor of a Lunar Surface Explorer – a mobile science platform that can be deployed and operate anywhere on the lunar surface. It would work both as an independent rover and as an assistant to astronauts.

First of all, the crater is being used to instruct postdoctoral researchers in the field of lunar science, as well as educate graduate students who are studying impact craters on the moon, Mars, and elsewhere.

Furthermore, Kring added, Meteor Crater is being used to tutor astronauts for planetary surface operations, which require different talents than those needed for past space shuttle flights and work on the International Space Station.

In terms of active research, the crater is telling the story of how material is ejected and deposited after a space rock impact. Its revelations have implications for craters on all planetary surfaces.

Moreover, research at the site is being conducted to determine how water produces gullies and otherwise erodes the crater. This could help scientists interpret observations of Mars.

Research is also being conducted at Meteor Crater, Kring said, to refine the age of the impact event itself. This work will help calibrate isotopic systems to date geologic events that occur elsewhere in the world.

Lastly, the crater is providing an on-the-spot opportunity for evaluating the design of traverses and geologic station activities on the moon, Mars and other exploration destinations.

New questions
There are still many open scientific questions about the crater itself.

Kring said that an important remaining problem is that the trajectory of the impacting iron asteroid and the damage it caused to Earth’s crust beneath the crater floor remain a mystery.

“Both might be solved with a shallow drilling campaign,” Kring said. “Overall, there is still much work to do.”

“As we push farther into the solar system, new questions are constantly being developed and require an assessment of new ideas at the world’s best preserved impact crater,” he said. “Thus, the crater is important for what it can tell us now, but is also important for what it will tell us as we continue to explore beyond low-Earth orbit.”

“We are excited about the fact that Meteor Crater has had a very important role as a science research laboratory in the past, but what is even more exciting is that almost every year, researchers request a visit to the crater because of a ‘new’ question that has been asked,” Andes said. “And the answer to that question may live in the crater. This has been happening for decades. I am sure it will continue to happen for many more decades and possibly even centuries.”

There’s also potential research at Meteor Crater investigating historical weather events. That information could even have a voice in the global warming debate, Andes said.

“It is humbling to consider the fact that every day researchers get to work at a place that may be viewed as the Rosetta Stone for astrogeological research,” he said. “This clearly illustrates the need to preserve it to the greatest degree possible while allowing legitimate research to happen here.”

Read the entire article at Space.com.