“Japan is devoted to integrated research that includes physical science and engineering research conducted both in space and on the ground. SSERVI addresses basic and applied research on the Moon, Near Earth Asteroids, the martian moons Phobos and Deimos, and the near space environments of these target bodies. We are eager to see the collaborative scientific discoveries that result from this partnership,” said Dr. Masaki Fujimoto, Professor of Space Plasma Physics at the Institute of Space and Astronautical Science, JAXA. 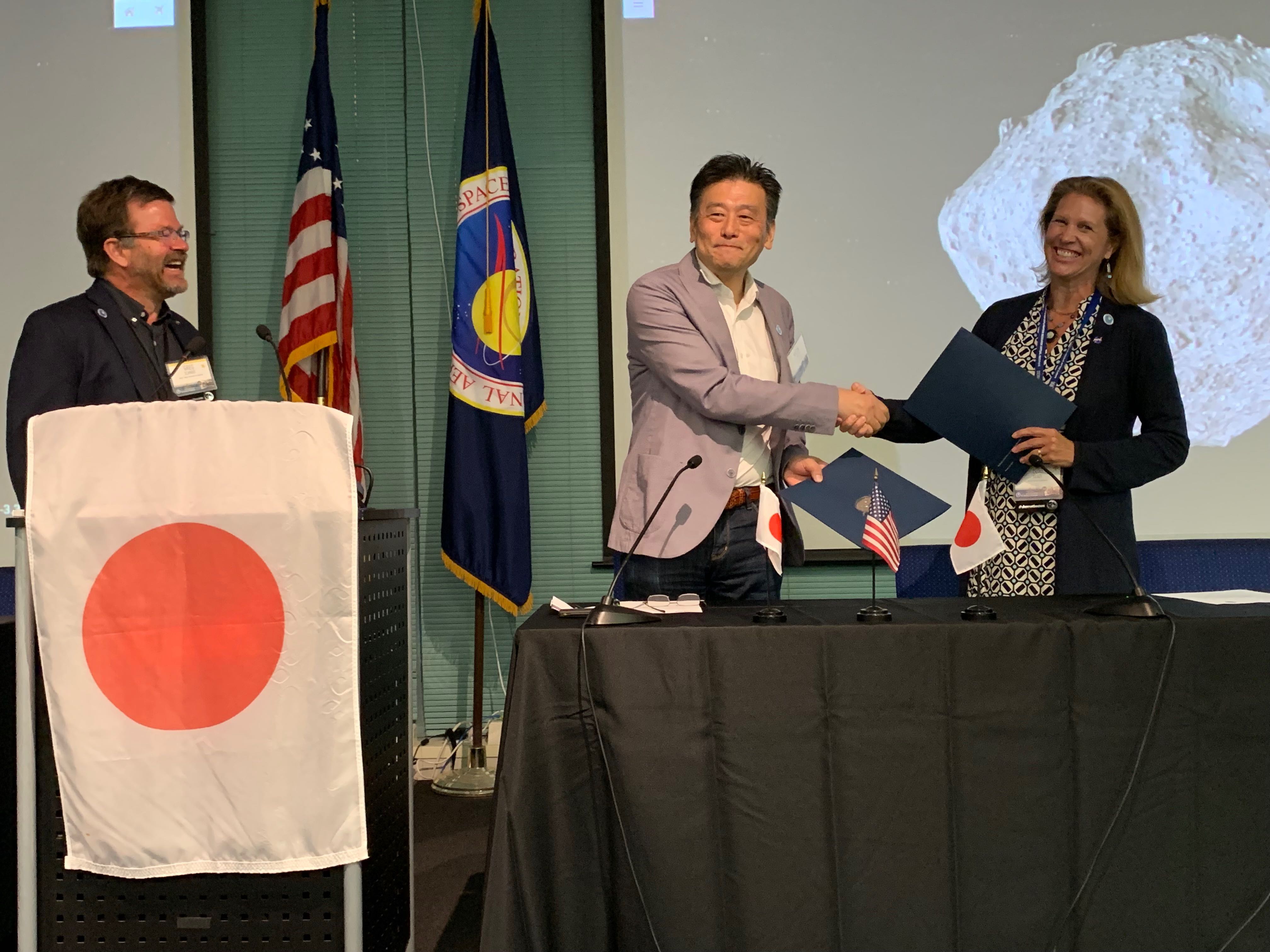 ISAS, a division of JAXA, is the national center of space science research in Japan. ISAS is strongly involved with the space science and engineering communities across Japan, making it an appropriate host institute for the Japanese SSERVI node. The diversity and range of ISAS activities means that there are numerous areas of overlap where international SSERVI activities could be complementary. The partnership was signed today by the Dr. Masaki Fujimoto, PI of the Japan node, and Kristina Gibbs, Director of International Partnerships, on behalf of SSERVI Director Greg Schmidt.

ISAS has a robust research program focused on the history, evolution, and environment of Earth’s Moon, and its future exploration and utilization. The research done by the small bodies community at ISAS has mainly centered around the sample return missions Hayabusa (completed), Hayabusa 2 (underway), and the Martian Moons eXploration (MMX) mission (under-development). The new scientific collaboration between the two institutes will enable the future development of joint activities, the exchange of scientists involved in space exploration research, and shared use of respective research laboratories.

“Our Japanese partners have put together a compelling proposal that outlines multiple topics for potential collaborative research. In particular, their strengths in conducting missions to the Moon, asteroids, and the martian moons Phobos and Deimos, will be important to NASA as its international partners help carry out the ambitious activities of creating a sustained human presence on the Moon, and exploring the solar system with robots and humans,” said Schmidt. “Modern day space exploration is an international effort, and we look forward to a long and close partnership between our respective countries.”

Based and managed at NASA’s Ames Research Center in Moffett Field, California, SSERVI is a virtual institute that, together with U.S. and international partnerships, brings researchers together in a collaborative virtual setting. The virtual institute model enables cross-team and interdisciplinary research that pushes forward the boundaries of science and exploration. SSERVI is funded by the Science Mission Directorate and Human Exploration and Operations Mission Directorate at NASA Headquarters in Washington.