The robotic spacecraft MESSENGER ran out of fuel. With no way to make major adjustments to its orbit around the planet Mercury, the probe smashed into the surface at more than 8,750 miles per hour (3.91 kilometers per second). The impact added a new crater to the planet’s scarred face that engineers estimate was as wide as 52 feet (16 meters).

A NASA planetary exploration mission came to a planned, but nonetheless dramatic, end Thursday when it slammed into Mercury’s surface at about 8,750 mph and created a new crater on the planet’s surface.

Mission control confirmed end of operations just a few minutes later, at 3:40 p.m., when no signal was detected by NASA’s Deep Space Network (DSN) station in Goldstone, California, at the time the spacecraft would have emerged from behind the planet. This conclusion was independently confirmed by the DSN’s Radio Science team, which also was monitoring for a signal from MESSENGER.

“Going out with a bang as it impacts the surface of Mercury, we are celebrating MESSENGER as more than a successful mission,” said John Grunsfeld, associate administrator for NASA’s Science Mission Directorate in Washington. “The MESSENGER mission will continue to provide scientists with a bonanza of new results as we begin the next phase of this mission–analyzing the exciting data already in the archives, and unravelling the mysteries of Mercury.”

Prior to impact, MESSENGER’s mission design team predicted the spacecraft would pass a few miles over a lava-filled basin on the planet before striking the surface and creating a crater estimated to be as wide as 50 feet.

MESSENGER’s lonely demise on the small, scorched planet closest to the sun went unobserved because the probe hit the side of the planet facing away from Earth, so ground-based telescopes were not able to capture the moment of impact. Space-based telescopes also were unable to view the impact, as Mercury’s proximity to the sun would damage optics.

MESSENGER’s last day of real-time flight operations began at 11:15 a.m., with initiation of the final delivery of data and images from Mercury via a 230-foot (70-meter) DSN antenna located in Madrid, Spain. After a planned transition to a 111-foot (34-meter) DSN antenna in California, at 2:40 p.m., mission operators later confirmed the switch to a beacon-only communication signal at 3:04 p.m.

The mood in the Mission Operations Center at APL was both somber and celebratory as team members watched MESSENGER’s telemetry drop out for the last time, after more than four years and 4,105 orbits around Mercury.

“We monitored MESSENGER’s beacon signal for about 20 additional minutes,” said mission operations manager Andy Calloway of APL. “It was strange to think during that time MESSENGER had already impacted, but we could not confirm it immediately due to the vast distance across space between Mercury and Earth.”

MESSENGER was launched on Aug. 3, 2004, and began orbiting Mercury on March 17, 2011. Although it completed its primary science objectives by March 2012, the spacecraft’s mission was extended two times, allowing it to capture images and information about the planet in unprecedented detail.

During a final extension of the mission in March, referred to as XM2, the team began a hover campaign that allowed the spacecraft to operate within a narrow band of altitudes from five to 35 kilometers from the planet’s surface.

On Tuesday, the team successfully executed the last of seven daring orbit correction maneuvers that kept MESSENGER aloft long enough for the spacecraft’s instruments to collect critical information on Mercury’s crustal magnetic anomalies and ice-filled polar craters, among other features. After running out of fuel, and with no way to increase its altitude, MESSENGER was finally unable to resist the sun’s gravitational pull on its orbit.

“Today we bid a fond farewell to one of the most resilient and accomplished spacecraft to ever explore our neighboring planets,” said Sean Solomon, MESSENGER’s principal investigator and director of Columbia University’s Lamont-Doherty Earth Observatory in Palisades, New York. “A resourceful and committed team of engineers, mission operators, scientists, and managers can be extremely proud that the MESSENGER mission has surpassed all expectations and delivered a stunningly long list of discoveries that have changed our views–not only of one of Earth’s sibling planets, but of the entire inner solar system.”

Among its many accomplishments, the MESSENGER mission determined Mercury’s surface composition, revealed its geological history, discovered its internal magnetic field is offset from the planet’s center, and verified its polar deposits are dominantly water ice. 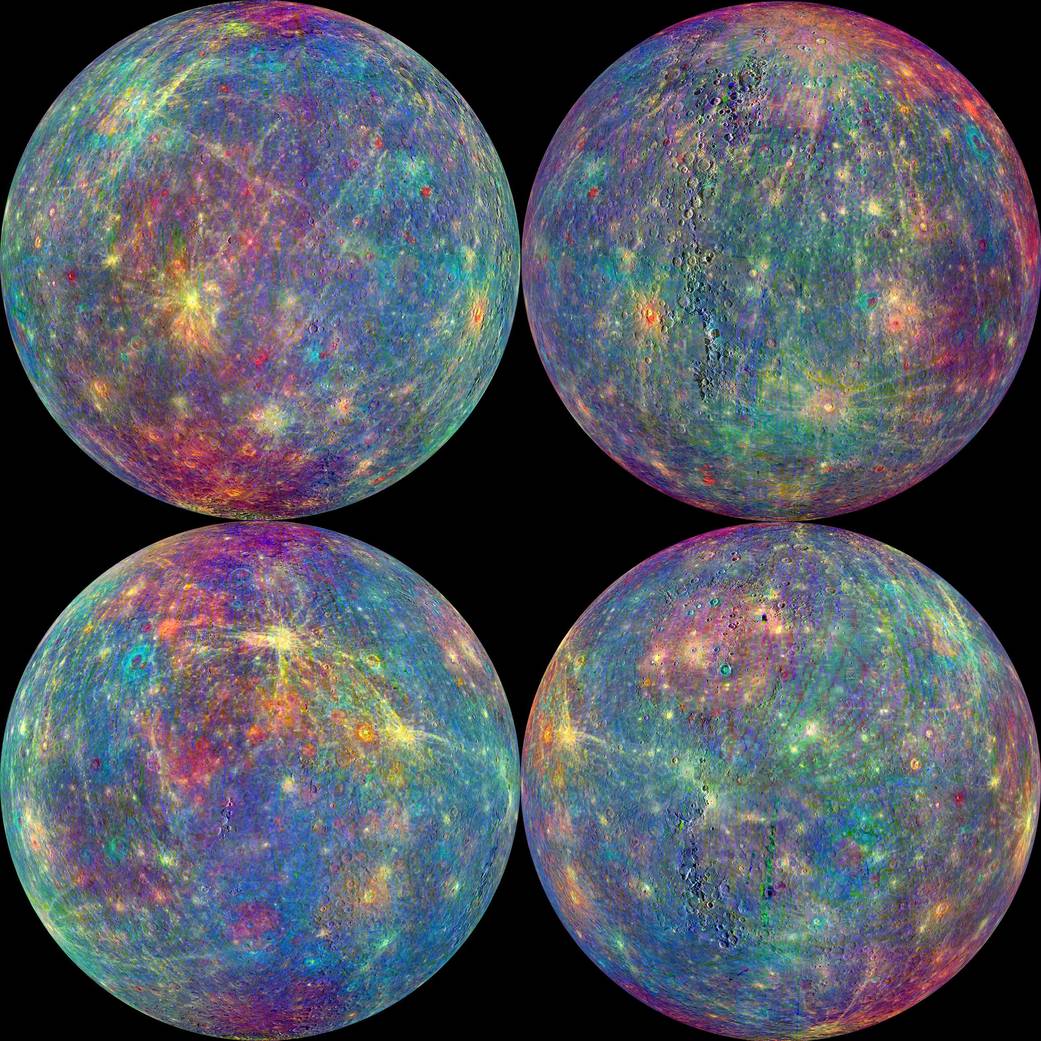 The Mercury Atmosphere and Surface Composition Spectrometer (MASCS) instrument aboard NASA’s MESSENGER spacecraft was designed to study both the exosphere and surface of the planet Mercury. To learn more about the minerals and surface processes on Mercury, the Visual and Infrared Spectrometer (VIRS) portion of MASCS has been diligently collecting single tracks of spectral surface measurements since MESSENGER entered Mercury orbit on March 17, 2011. The track coverage is now extensive enough that the spectral properties of both broad terrains and small, distinct features such as pyroclastic vents and fresh craters can be studied. To accentuate the geological context of the spectral measurements, the MASCS data have been overlain on the monochrome mosiac from the Mercury Dual Imaging System (MDIS), an instrument with wide- and narrow-angle cameras to map the rugged landforms and spectral variations on Mercury’s surface. Click on the image to explore the colorful diversity of surface materials in more detail!

The MESSENGER spacecraft is the first ever to orbit the planet Mercury, and the spacecraft’s seven scientific instruments and radio science investigation are unraveling the history and evolution of the solar system’s innermost planet. In the mission’s more than four years of orbital operations, MESSENGER has acquired over 250,000 images and extensive other data sets. MESSENGER’s highly successful orbital mission is about to come to an end, as the spacecraft runs out of propellant and the force of solar gravity causes it to impact the surface of Mercury near the end of April 2015.

APL built and operated the MESSENGER spacecraft and managed the mission for NASA’s Science Mission Directorate in Washington.

Learn more about the accomplishments of NASA’s MESSENGER mission at: