NASA Creates Most Detailed Picture Of Our Night Sky 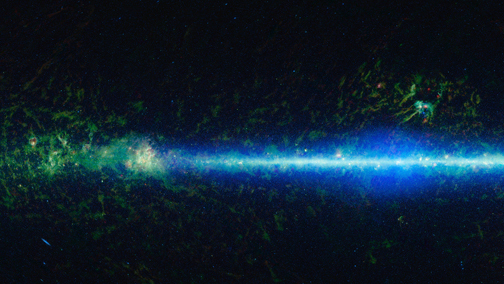 This is a mosaic of the images covering the entire sky as observed by the Wide-field Infrared Survey Explorer (WISE), part of its All-Sky Data Release. Image credit: NASA/JPL-Caltech/UCLA. CLICK TO ENLARGE.

NASA unveiled a new atlas and catalog of the entire infrared sky today showing more than a half billion stars, galaxies and other objects captured by the Wide-field Infrared Survey Explorer (WISE) mission. It’s the largest, most detailed infrared view of space, ever.

The luminescent blue particles in the middle are stars in the tendrils of our disk-shaped Milky Way. They’re not really blue. As this photo was technically taken in infrared, the wavelengths captured are far beyond our color spectrum. But scientists use what are known as false colors as a visual shorthand to identify objects. Blue is used in shorter IR lengths, green in medium, and red in longer. In this regard, the colors–while entirely fictitious–parallel our visual spectrum. 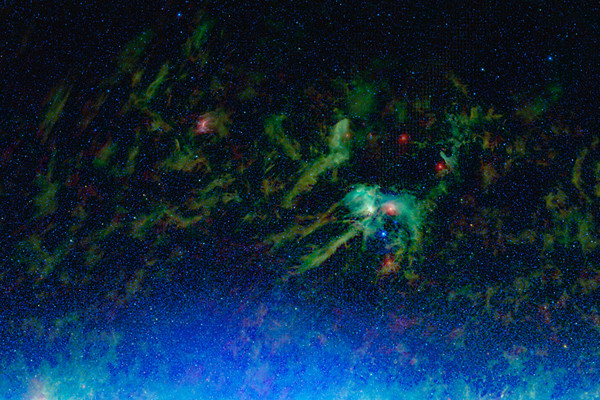 “Today, WISE delivers the fruit of 14 years of effort to the astronomical community,” said Edward Wright, WISE principal investigator at UCLA, who first began working on the mission with other team members in 1998.

WISE launched Dec. 14, 2009, and mapped the entire sky in 2010 with vastly better sensitivity than its predecessors. It collected more than 2.7 million images taken at four infrared wavelengths of light, capturing everything from nearby asteroids to distant galaxies. Since then, the team has been processing more than 15 trillion bytes of returned data. A preliminary release of WISE data, covering the first half of the sky surveyed, was made last April.

The WISE catalog of the entire sky meets the mission’s fundamental objective. The individual WISE exposures have been combined into an atlas of more than 18,000 images covering the sky and a catalog listing the infrared properties of more than 560 million individual objects found in the images. Most of the objects are stars and galaxies, with roughly equal numbers of each. Many of them have never been seen before.

WISE observations have led to numerous discoveries, including the elusive, coolest class of stars. Astronomers hunted for these failed stars, called “Y-dwarfs,” for more than a decade. Because they have been cooling since their formation, they don’t shine in visible light and could not be spotted until WISE mapped the sky with its infrared vision.

Other discoveries were unexpected. WISE found the first known “Trojan” asteroid to share the same orbital path around the sun as Earth. One of the images released today shows a surprising view of an “echo” of infrared light surrounding an exploded star. The echo was etched in the clouds of gas and dust when the flash of light from the supernova explosion heated surrounding clouds. At least 100 papers on the results from the WISE survey already have been published. More discoveries are expected now that astronomers have access to the whole sky as seen by the spacecraft.

“With the release of the all-sky catalog and atlas, WISE joins the pantheon of great sky surveys that have led to many remarkable discoveries about the universe,” said Roc Cutri, who leads the WISE data processing and archiving effort at the Infrared and Processing Analysis Center at the California Institute of Technology in Pasadena. “It will be exciting and rewarding to see the innovative ways the science and educational communities will use WISE in their studies now that they have the data at their fingertips.”

NASA’s Jet Propulsion Laboratory (JPL) in Pasadena, Calif., manages and operates WISE for NASA’s Science Mission Directorate in Washington. The mission was competitively selected under NASA’s Explorers Program, which is managed by NASA’s Goddard Space Flight Center in Greenbelt, Md. The science instrument was built by the Space Dynamics Laboratory in Logan, Utah, and the spacecraft was built by Ball Aerospace and Technologies Corp., in Boulder, Colo. Science operations, data processing and archiving take place at the Infrared Processing and Analysis Center at the California Institute of Technology in Pasadena. Caltech manages JPL for NASA.

For a collection of WISE images released to date, visit: https://wise.ssl.berkeley.edu/gallery_images.html

An introduction and quick guide to accessing the WISE all-sky archive for astronomers is online at: https://wise2.ipac.caltech.edu/docs/release/allsky/

Instructions for technically minded individuals wanting to try their hand at using the archive are at: https://wise.ssl.berkeley.edu/wise_image_service.html