Was Mars home to microbial life? Is it today? What can it teach us about life elsewhere in the cosmos or how life began on Earth? What clues will we discover about Earth’s past, present and future? NASA and its partners have been traversing the volcanic lava terrains of Hawai’i to answer these fundamental questions about life beyond Earth.

Engineers, scientists and software technology experts are working together to gain essential knowledge in preparing for human and robotic exploration of Mars and its moons, our moon and near-Earth asteroids. 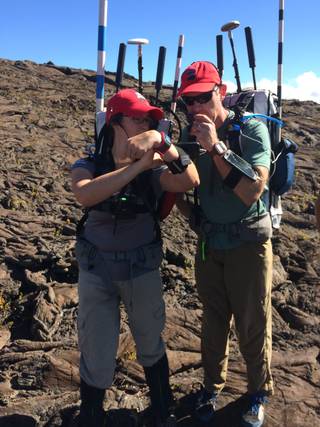 Earlier this summer, the project conducted field studies related to present-day Mars, at lava flows in Idaho. This field test focused on terrestrial volcanic terrains as analog environments for early Mars along the lava flows of Mauna Ulu.

“Our team is seeking to understand the habitability potential of basalt-rich volcanic environments as an analog to early Mars,” said Dr. Darlene Lim, principal investigator of the BASALT program at Ames. “However, we added a twist to our scientific fieldwork by conducting it under simulated Mars mission constraints.”

Analog environments provide NASA with data about strengths, limitations and the validity of exploration operations, and helps to define ways to enhance scientific exploration. Analog locations are identified based on their physical similarities to environments on other worlds.

From the lava flows in Hawaii, “astronauts” collected basalt rock samples for biological and geological science studies to characterize life and life-related chemistry in basaltic environments representing these two epochs of Martian history. From mission control, located nearly 15km away, communication latencies and bandwidth limitations were simulated, to reflect architectural expectations during a Mars mission.

Because communication delays between an astronaut crew on Mars and their science team on Earth will range from 4 to 22 minutes one-way (8-40 minutes round-trip), astronauts will need to be able to manage their own activities while also being able to receive input from science mission control. The astronauts used wrist-displays that included a mission-planning tool called Playbook, to operate autonomously during lapses in communication. In addition to Playbook, NASA’s Exploration Ground Data Systems (xGDS) allowed the science team to track progress of the extra-vehicular (EV) traverses. The xGDS is an interactive suite of web software that syncs real world data from sensors and human observations with digital maps for analysis. Both xGDS and Playbook were developed by Ames to enable research for future manned deep space missions and increased autonomy by International Space Station astronauts.

“We’re testing out methods to support our astronauts on their mission of scientific discovery under these rather strenuous working conditions. Are these the tools we need to support our mission both on Mars and on Earth so that we can ensure scientific return? These questions drive our research here in Hawaii,” says Lim. 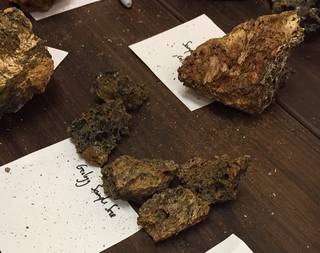 BASALT rock samples to be tested.

A major benefit to the BASALT project is the collaboration of scientists, engineers, operations specialists, and former astronauts that bring their diverse backgrounds and perspectives to the field, in an interdisciplinary manner, to help answer these questions.

The diversity of basalts collected was selected based on geological and biological features ranging from alteration, fumarole deposits, etc., and will be later analyzed in the laboratory. The in-situ, or “in place,” sample characterizations were performed using portable infrared spectrometer and thermal imaging science instruments that took images of the spectra from the samples. These mobile assessment tools enabled the BASALT team to select samples quickly and safely in full contact, without influence of scattered light and atmosphere.
Following the completion of a traverse, this collection of experts analyzed the day’s science investigations and operational successes using quantitative rankings.

NASA expects this science-driven exploration program to result in new scientific, operational and technological capabilities that will serve to enable and inform the next generation of human-robotic planetary exploration.

Learn more about the BASALT field tests at: