A new model of how the Earth’s moon formed is challenging the idea that the early Earth was struck by a Mars-sized body, ejecting material that would become the moon. The new research, by Dr. Robin M. Canup of the Southwest Research Institute, indicates that both bodies in the collision were four to five times the mass of Mars, roughly half the mass of today’s Earth.

After colliding once, the two similar-sized bodies re-collided and then merged briefly before separating into an early Earth surrounded by a disk of material that would coalesce into the Moon. The re-collision and merging left the two bodies with the similar chemical compositions seen today.

The giant impact hypothesis has been a widely accepted theory for how the Earth-Moon system formed. In the giant impact scenario, the Moon forms from debris ejected into an Earth-orbiting disk by the collision of a smaller proto-planet with the early Earth. One of the challenges to the longstanding theory of the collision is that a Mars-sized impacting body, whose composition likely would have differed substantially from that of Earth, likely would have left the Earth and Moon with different chemical compositions.

The new model by Southwest Research Institute (SwRI), motivated by accompanying work by others on the early dynamical history of the Moon, accounts for this similarity in composition while also yielding an appropriate mass for Earth and Moon.

The new models developed by Dr. Robin M. Canup, an associate vice president in the SwRI Space Science and Engineering Division, and funded by the NASA Lunar Science Institute, suggest that the early Earth and Moon were created by the collision of much larger impactors than were previously considered. 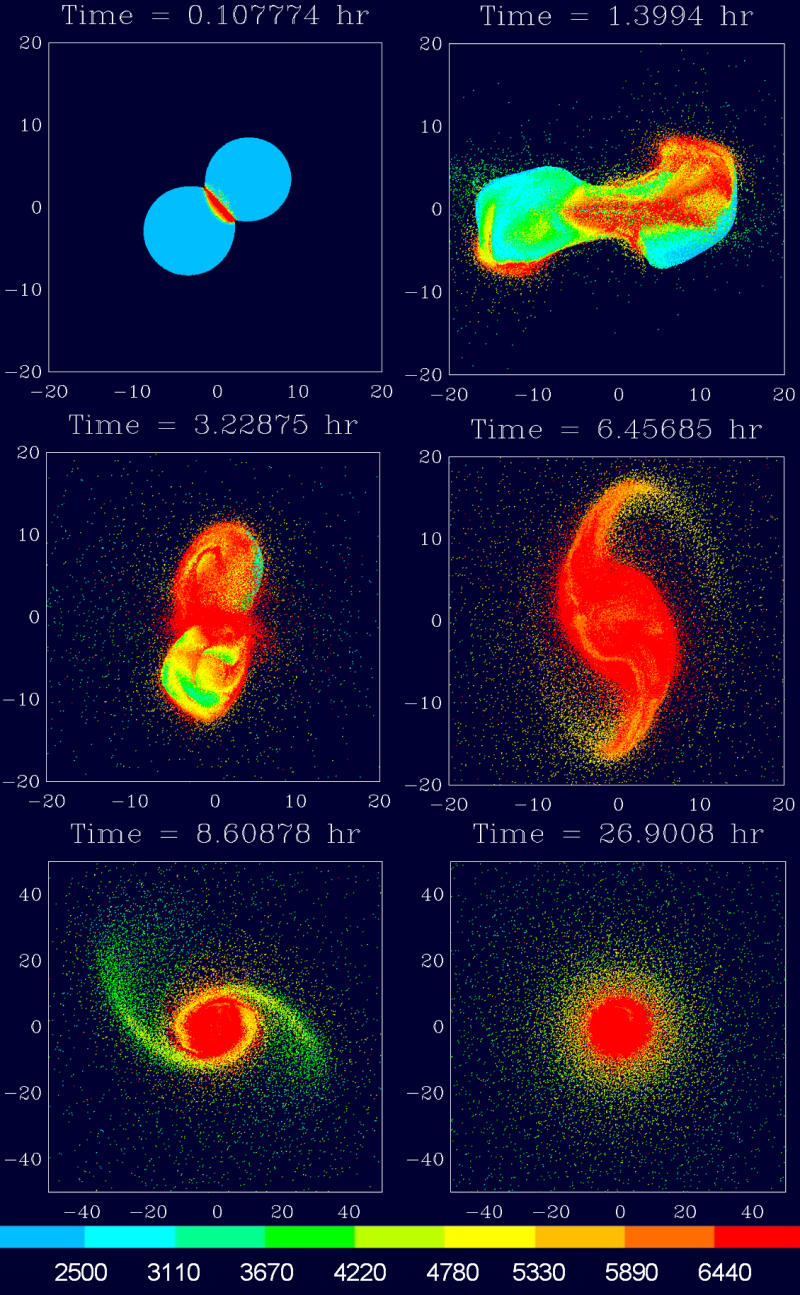 Shown is an off-center, low-velocity collision of two protoplanets containing 45 percent and 55 percent of the Earth’s mass. Color scales with particle temperature in kelvin, with blue-to-red indicating temperatures from 2,000 K to in excess of 6,440 K. After the initial impact, the protoplanets re-collide, merge and form a rapidly spinning Earth-mass planet surrounded by an iron-poor protolunar disk containing about 3 lunar masses. The composition of the disk and the final planet’s mantle differ by less than 1 percent. (Credit: Southwest Research Institute)

In the new simulations, both the impactor and the target are about 4 to 5 times the mass of Mars. The near symmetry of the collision causes the disk’s composition to be extremely similar to that of the final planet’s mantle over a relatively broad range of impact angles and speeds, consistent with the Earth-Moon compositional similarities.

The new impacts produce an Earth that is rotating 2 to 2.5 times faster than implied by the current angular momentum of the Earth-Moon system, which is contained in both the Earth’s rotation and the Moon’s orbit.

However, in an accompanying paper in Science, Dr. Matija Ćuk, SETI Institute, and Dr. Sarah T. Stewart, Harvard University, show that a resonant interaction between the early Moon and the Sun — known as the evection resonance — could have decreased the angular momentum of the Earth-Moon system by this amount soon after the Moon-forming impact.

“By allowing for a much higher initial angular momentum for the Earth-Moon system, the Ćuk and Stewart work allows for impacts that for the first time can directly produce an appropriately massive disk with a composition equal to that of the planet’s mantle,” says Canup.

In addition to the impacts identified in Canup’s paper, Ćuk and Stewart show that impacts involving a much smaller, high-velocity impactor colliding into a target that is rotating very rapidly due to a prior impact can also produce a disk-planet system with similar compositions.

“The ultimate likelihood of each impact scenario will need to be assessed by improved models of terrestrial planet formation, as well as by a better understanding of the conditions required for the evection resonance mechanism,” adds Canup.

The paper, “Forming a Moon with an Earth-like composition via a Giant Impact,” by R.M Canup, was published Oct. 17, 2012, in the journal Science online, at the Science Express website. The results also will be presented at the 44th Meeting of the AAS Division for Planetary Sciences in Reno, Nev.