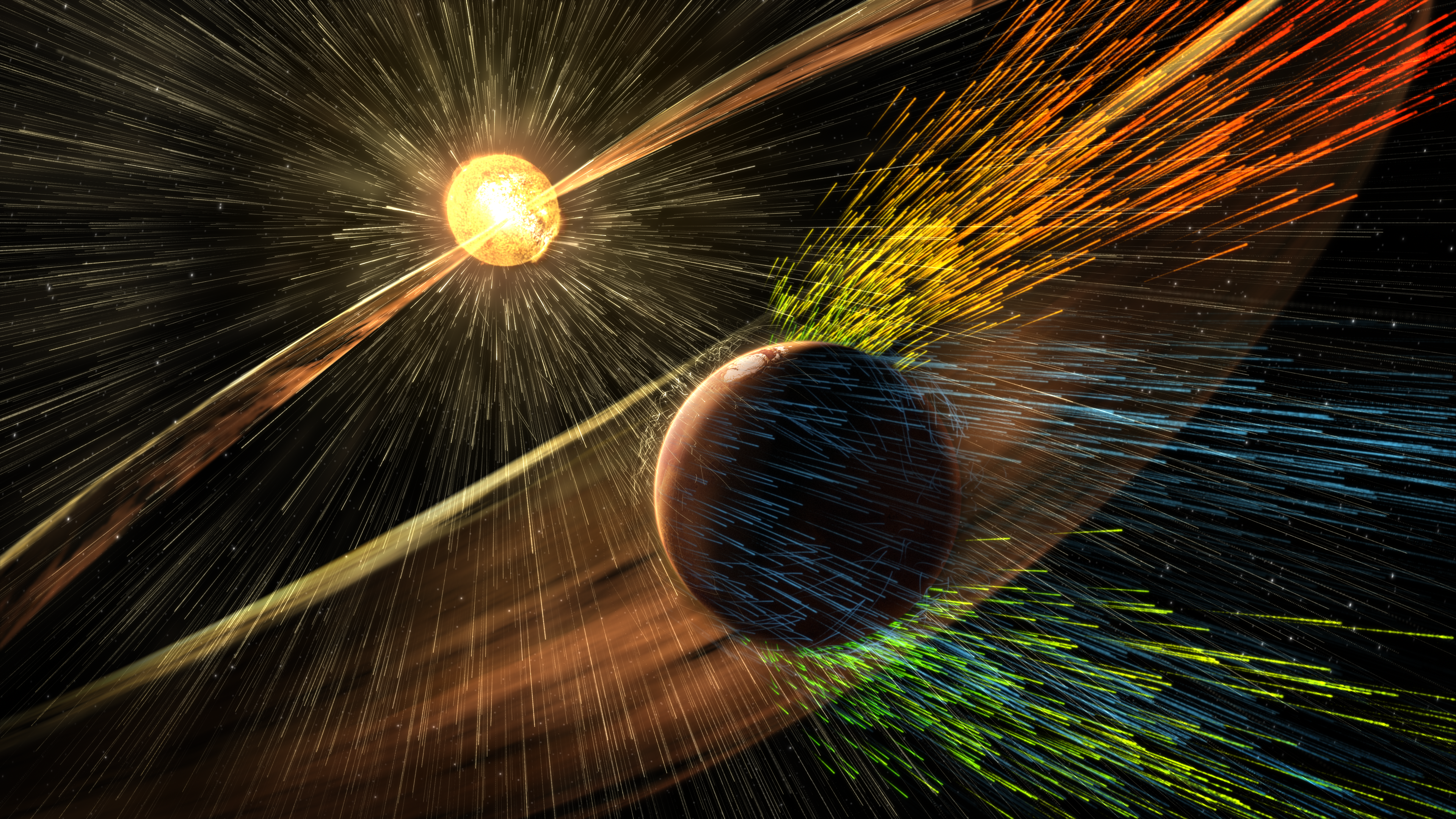 NASA’s Mars Atmosphere and Volatile Evolution (MAVEN) mission has identified the process that appears to have played a key role in the transition of the Martian climate from an early, warm and wet environment that might have supported surface life to the cold, arid planet Mars is today.

MAVEN data have enabled researchers to determine the rate at which the Martian atmosphere currently is losing gas to space via stripping by the solar wind. The findings reveal that the erosion of Mars’ atmosphere increases significantly during solar storms. The scientific results from the mission appear in the Nov. 5 issues of the journals Science and Geophysical Research Letters.

“Mars appears to have had a thick atmosphere warm enough to support liquid water which is a key ingredient and medium for life as we currently know it,” said John Grunsfeld, astronaut and associate administrator for the NASA Science Mission Directorate in Washington. “Understanding what happened to the Mars atmosphere will inform our knowledge of the dynamics and evolution of any planetary atmosphere. Learning what can cause changes to a planet’s environment from one that could host microbes at the surface to one that doesn’t is important to know, and is a key question that is being addressed in NASA’s journey to Mars.”

MAVEN measurements indicate that the solar wind strips away gas at a rate of about 100 grams (equivalent to roughly 1/4 pound) every second. “Like the theft of a few coins from a cash register every day, the loss becomes significant over time,” said Bruce Jakosky, MAVEN principal investigator at the University of Colorado, Boulder. “We’ve seen that the atmospheric erosion increases significantly during solar storms, so we think the loss rate was much higher billions of years ago when the sun was young and more active.”

In addition, a series of dramatic solar storms hit Mars’ atmosphere in March 2015, and MAVEN found that the loss was accelerated. The combination of greater loss rates and increased solar storms in the past suggests that loss of atmosphere to space was likely a major process in changing the Martian climate.

The solar wind is a stream of particles, mainly protons and electrons, flowing from the sun’s atmosphere at a speed of about one million miles per hour. The magnetic field carried by the solar wind as it flows past Mars can generate an electric field, much as a turbine on Earth can be used to generate electricity. This electric field accelerates electrically charged gas atoms, called ions, in Mars’ upper atmosphere and shoots them into space.

MAVEN has been examining how solar wind and ultraviolet light strip gas from of the top of the planet’s atmosphere. New results indicate that the loss is experienced in three different regions of the Red Planet: down the “tail,” where the solar wind flows behind Mars, above the Martian poles in a “polar plume,” and from an extended cloud of gas surrounding Mars. The science team determined that almost 75 percent of the escaping ions come from the tail region, and nearly 25 percent are from the plume region, with just a minor contribution from the extended cloud.

Mars is a cold and barren desert today, but scientists think that in the ancient past it was warm and wet. The loss of the early Martian atmosphere may have led to this dramatic change, and one of the prime suspects is the solar wind. Unlike Earth, Mars lacks a global magnetic field to deflect the stream of charged particles continuously blowing off the Sun. Instead, the solar wind crashes into the Mars upper atmosphere and can accelerate ions into space. Now, for the first time, NASA’s MAVEN spacecraft has observed this process in action – by measuring the speed and direction of ions escaping from Mars. This data visualization compares simulations of the solar wind and Mars atmospheric escape with new measurements taken by MAVEN. Credit: NASA-GSFC/CU Boulder LASP/University of Iowa

Ancient regions on Mars bear signs of abundant water – such as features resembling valleys carved by rivers and mineral deposits that only form in the presence of liquid water. These features have led scientists to think that billions of years ago, the atmosphere of Mars was much denser and warm enough to form rivers, lakes and perhaps even oceans of liquid water.

“Solar-wind erosion is an important mechanism for atmospheric loss, and was important enough to account for significant change in the Martian climate,” said Joe Grebowsky, MAVEN project scientist from NASA’s Goddard Space Flight Center in Greenbelt, Maryland. “MAVEN also is studying other loss processes — such as loss due to impact of ions or escape of hydrogen atoms — and these will only increase the importance of atmospheric escape.”

The goal of NASA’s MAVEN mission, launched to Mars in November 2013, is to determine how much of the planet’s atmosphere and water have been lost to space. It is the first such mission devoted to understanding how the sun might have influenced atmospheric changes on the Red Planet. MAVEN has been operating at Mars for just over a year and will complete its primary science mission on Nov. 16.

To view an animation simulating the loss of atmosphere and water on Mars:

For more information and images on Mars’ lost atmosphere, visit: