This is a follow-on story from our previous post on the subject.

The Sutter’s Mill meteorite is a very rare type of meteor, and scientists have precious few samples of this kind of material. The meteorites are very interesting to scientists from an astrobiology perspective, as they contain molecules related to how the building blocks for life on Earth may have been delivered from outer space. Scientist believe that this meteor could hold the answers to the origin of life on Earth and the universe. By studying the meteor, scientists also will learn more about the early solar system and the formation of our planets.

“This is among the most chemically primitive meteorites,” said SSERVI Deputy Director Greg Schmidt. “It’s like asking ‘how did life on Earth begin?’ and then having a fossil fall right in your back yard. This is exciting stuff — The Sutter’s Mill Meteorite could be the most profound sample collected in over 40 years.”

The people who work at NASA had an opportunity to participate in the meteor hunt. Peter Jenniskens, a meteor astronomer with the SETI Institute working in collaboration with SSERVI (then NLSI), led the search. A group of NASA Ames employees went to the mountains to assist in the search on Thursday, May 3 and Friday, May 4, 2012. 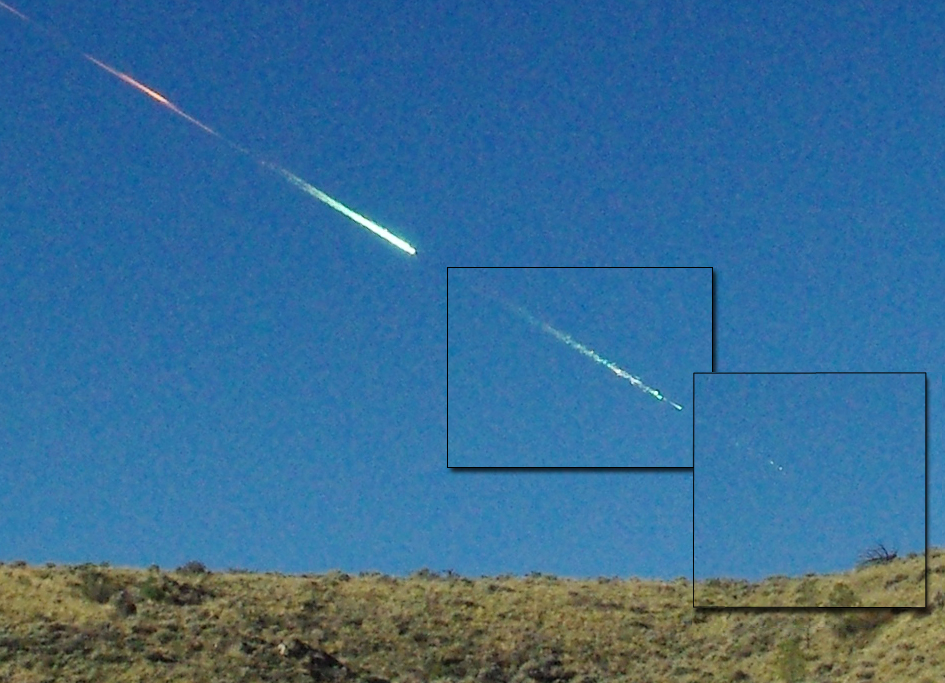 Researchers digging deeper into the origins of the Sutter’s Mill meteorite, which fell in California’s Gold Country in 2012, found diamonds and other “treasures” that provide important new insight into the early days of our solar system. They report their results in thirteen papers in the November issue of Meteoritics & Planetary Science.

“Sutter’s Mill gives us a glimpse of what future NASA spacecraft may find when they bring back samples from a primitive asteroid,” said consortium lead Peter Jenniskens of the SETI Institute in Mountain View, California, at NASA’s Ames Research Center in Moffett Field, California. “From what falls naturally to the ground, much does not survive the violent collision with Earth’s atmosphere.”

Jenniskens found one of the first and one of the most unusual of the Sutter’s Mill meteorites before rain hit the area. In his search, Jenniskens was guided by Marc Fries of NASA’s Johnson Space Center, in Houston, who describes in detail how Doppler weather radar enabled the rapid and pristine collection of the meteorites. 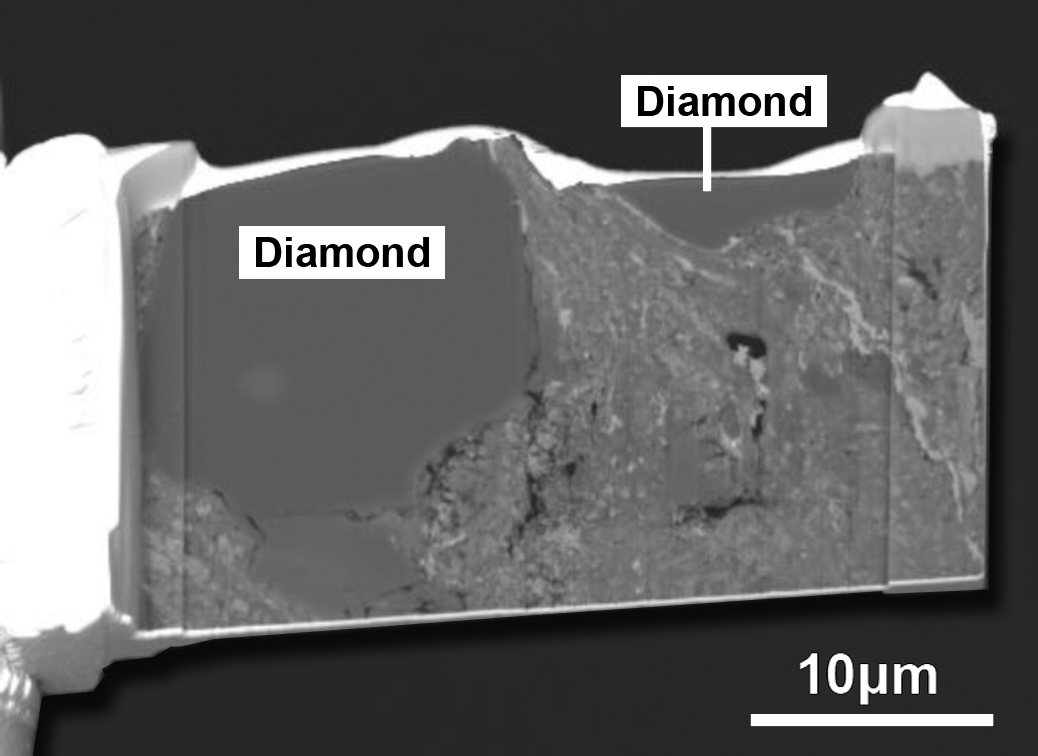 This is a secondary electron image of two large diamond crystals in the matrix of the Sutter’s Mill number SM2 meteorite, as prepared by a focused ion beam. The origin of the diamonds is something of a mystery since they are considerably larger than those found in any chondritic meteorites. Credit: NASA Johnson/M. Zolensky 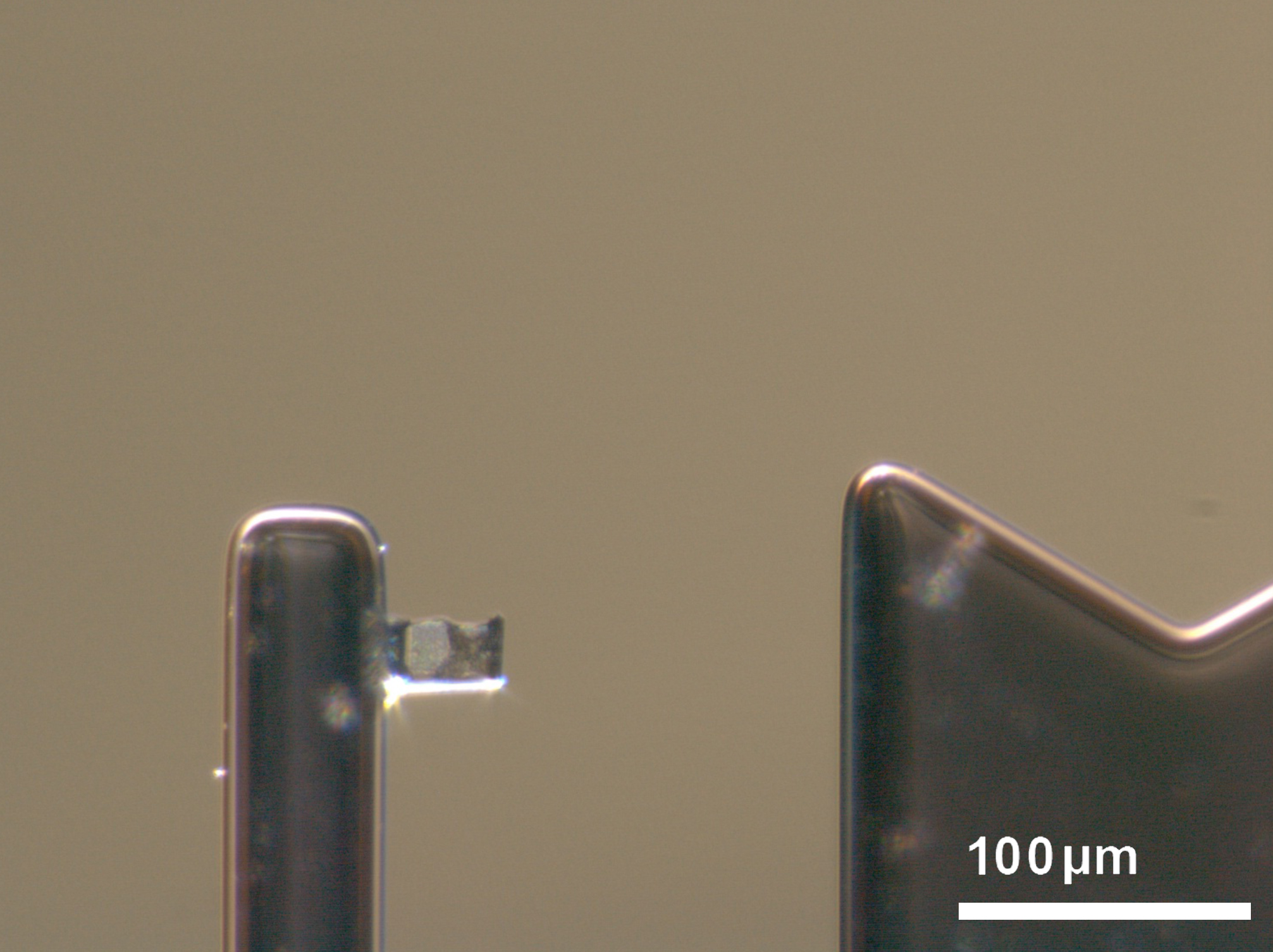 The diamonds are transparent and colorless in this optical image of the same focused ion beam-prepared slice of Sutter’s Mill number SM2. Credit: NASA Johnson/M. Zolensky

“The two 10-micron diamond grains we found in this meteorite are too small to sparkle in a ring,” said Mike Zolensky, space scientist of Johnson, working with associate professor Yoko Kebukawa late of Hokkaido University, Japan, “But their size is much larger than the nanometer-sized diamonds commonly found in such meteorites.”

Nanodiamonds are thought to originate in the atmospheres of stars. The larger diamonds found in Sutter’s Mill may have had another origin closer to home.

“We suspect that these diamonds are so-called xenoliths,” says Kebukawa. “Bits and pieces that originated in the interior of other much larger parent bodies.”

University of California (UC), Davis researchers Akane Yamakawa and Qing-Zhu Yin studied the different forms of the element chromium, called isotopes. They found that at least five different stellar sources composed of mixtures of 54-chromium-rich and -poor materials must have contributed matter to the nascent solar system four and half billion years ago. Some of these materials remained in the Sutter’s Mill meteorite.

“The formation of the solar system did not fully erase and homogenize these signatures and Sutter’s Mill provides the clearest record yet,” said Yin, also a co-lead of the Sutter’s Mill Meteorite Consortium.

Some fragments escaped alteration by liquid water, while others where heavily altered. Based on isotopes of the elements manganese and chromium, NASA Earth and Space Science Fellow Christine Jilly and colleagues now report when that happened.

“We determined that minerals such as calcium and magnesium carbonate likely precipitated from liquid water 2.4 to 5.0 million years after the formation of the solar system,” says Jilly. “It is possible that radioactive compounds in the meteorite’s parent body heated the nascent planet to the point that water ice became liquid.”

In primitive meteorites like Sutter’s Mill, some grains survive from what existed in the cloud of gas, dust and ices that formed the solar system. In Sutter’s Mill, the liquid water appears to have destroyed the silicate type of these, according to Xuchao Zhao of the Chinese Academy of Sciences, working with NASA and UC Davis colleagues.

The meteorite also was heated, perhaps as recent as during entry in Earth’s atmosphere. Using a technique called thermoluminescense, Derek Sears, senior research scientist at Ames, determined the rock was heated to 572 degrees Fahrenheit (300 degrees Celsius) in the last 100,000 years.

Other materials were heated on the parent body, differently at different locations. Zolensky found unusual materials not seen in any other meteorites, including a very unusual calcium sulfide called oldhamite, also suspected to be a xenolith.

“I don’t know of any similar meteorites that contain both heated and unheated materials,” said Zolensky. “Some materials were heated to 932 degrees Fahrenheit (500 degrees Celsius), while others clearly were not.”

Michel Nuevo and Scott Sandford, both astrophysicists at Ames probed numerous grains with infrared spectroscopy, as did Mehmet Yesiltas and colleagues at the University of Central Florida. They confirmed that some portions of the Sutter’s Mill meteorites were heated more than others, removing volatile organic compounds and causing chemical changes in the remainder.

“We still found small amounts of amino acids – building blocks of proteins – in the pristinely collected stone by Jenniskens” says Aaron Burton, then at NASA’s Goddard Space Flight Center in Greenbelt, Maryland, now at Johnson. “Indigenous amino acids were much less abundant in the Sutter’s Mill samples than in other such meteorites.”