For these studies, small satellites are defined as less than 180 kilograms in mass (about 400 pounds). CubeSats are built to standard specifications of 1 unit (U), which is equal to 10x10x10 centimeters (about 4x4x4 inches). They often are launched into orbit as auxiliary payloads, significantly reducing costs.

“These small but mighty satellites have the potential to enable transformational science,” said Dr. Jim Green, director of the Planetary Science Division at NASA Headquarters in Washington. “They will provide valuable information to assist in planning future Announcements of Opportunity, and to guide NASA’s development of small spacecraft technologies for deep space science investigation.”

NASA’s Science Mission Directorate is developing a small satellite strategy, with the goal of identifying high-priority science objectives in each discipline that can be addressed with CubeSats and SmallSats, managed for appropriate cost and risk. This multi-disciplinary approach will leverage and partner with the growing commercial sector to collaboratively drive instrument and sensor innovation.

For the full list of recipients, read the full story here. 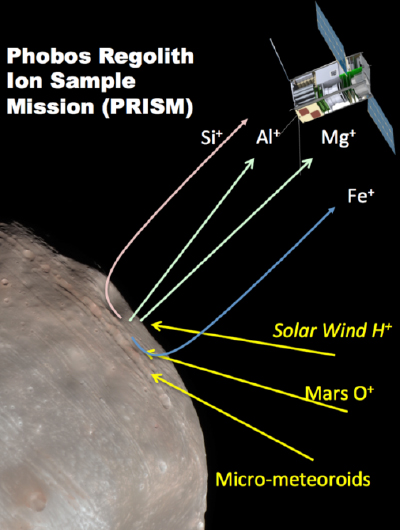 The PRISM concept is to obtain the surface composition of Phobos using the secondary ions ejected from the surface by incident solar wind and Mars tail oxygen. The application is called ‘secondary ion mass spectrometry’.