If you lived on one of Pluto’s moons, you might have a hard time determining when, or from which direction, the sun will rise each day. Comprehensive analysis of data from NASA’s Hubble Space Telescope shows that two of Pluto’s moons, Nix and Hydra, wobble unpredictably.

“Hubble has provided a new view of Pluto and its moons revealing a cosmic dance with a chaotic rhythm,” said John Grunsfeld, associate administrator of NASA’s Science Mission Directorate in Washington. “When the New Horizons spacecraft flies through the Pluto system in July we’ll get a chance to see what these moons look like up close and personal.” 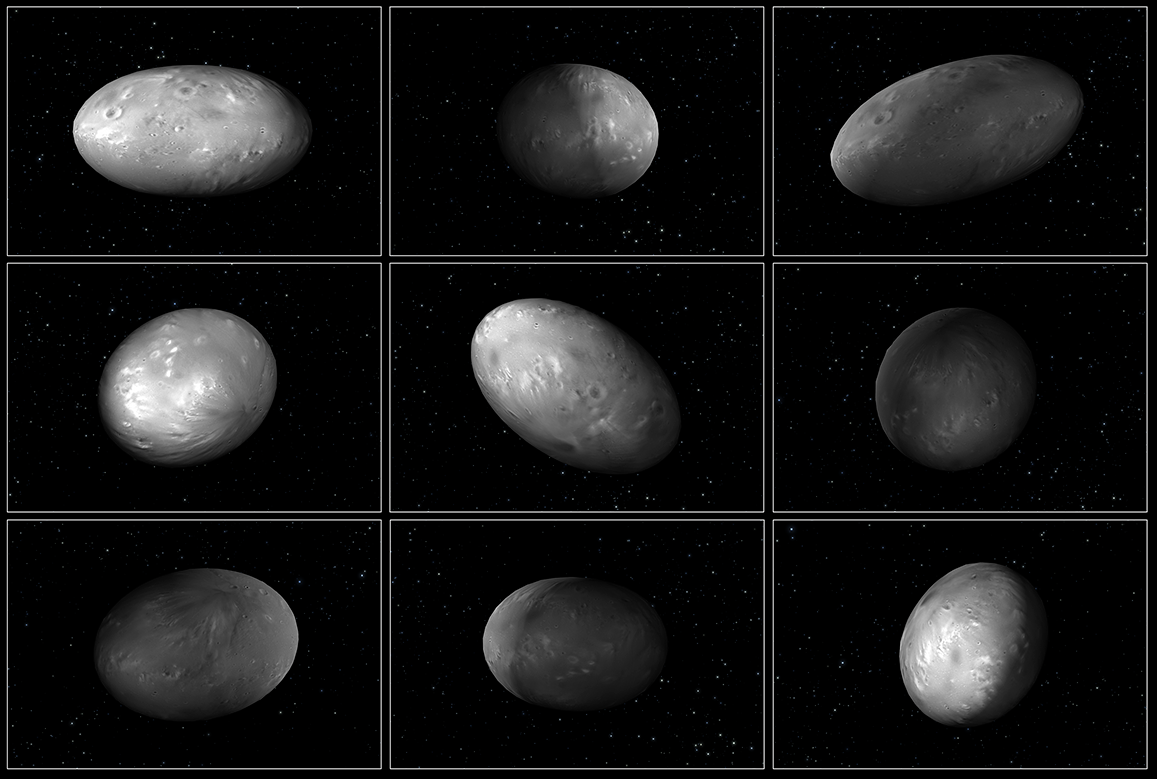 This set of computer modeling illustrations of Pluto’s moon Nix shows how the orientation of the moon changes unpredictably as it orbits the “double planet” Pluto-Charon. Credit: NASA/ESA/M. Showalter (SETI)/G. Bacon (STScI)

The moons wobble because they’re embedded in a gravitational field that shifts constantly. This shift is created by the double planet system of Pluto and Charon as they whirl about each other. Pluto and Charon are called a double planet because they share a common center of gravity located in the space between the bodies. Their variable gravitational field sends the smaller moons tumbling erratically. The effect is strengthened by the football-like, rather than spherical, shape of the moons. Scientists believe it’s likely Pluto’s other two moons, Kerberos and Styx, are in a similar situation.

The astonishing results, found by Mark Showalter of the SETI Institute in Mountain View, California and Doug Hamilton of the University of Maryland at College Park, will appear in the June 4 issue of the journal Nature.

“Prior to the Hubble observations, nobody appreciated the intricate dynamics of the Pluto system,” Showalter said. “Our research provides important new constraints on the sequence of events that led to the formation of the system.”

Showalter also found three of Pluto’s moons are presently locked together in resonance, meaning there is a precise ratio for their orbital periods.

“If you were sitting on Nix, you would see that Styx orbits Pluto twice for every three orbits made by Hydra,” noted Hamilton.

Hubble data also reveal the moon Kerberos is as dark as a charcoal briquette, while the other frozen moons are as bright as sand. It was predicted that dust blasted off the moons by meteorite impacts should coat all the moons, giving their surfaces a homogenous look, which makes Kerberos’ coloring very surprising.

NASA’s New Horizons spacecraft, which will fly by the Pluto system in July, may help settle the question of the asphalt-black moon, as well as the other oddities uncovered by Hubble. These new discoveries are being used to plan science observations for the New Horizons flyby.

“We are learning chaos may be a common trait of binary systems,” Hamilton said. “It might even have consequences for life on planets if found in such systems.”

Clues to the Pluto commotion first came when astronomers measured variations in the light reflected off Nix and Hydra. Analyzing Hubble images of Pluto taken from 2005 to 2012, scientists compared the unpredictable changes in the moons’ brightness to models of spinning bodies in complex gravitational fields. 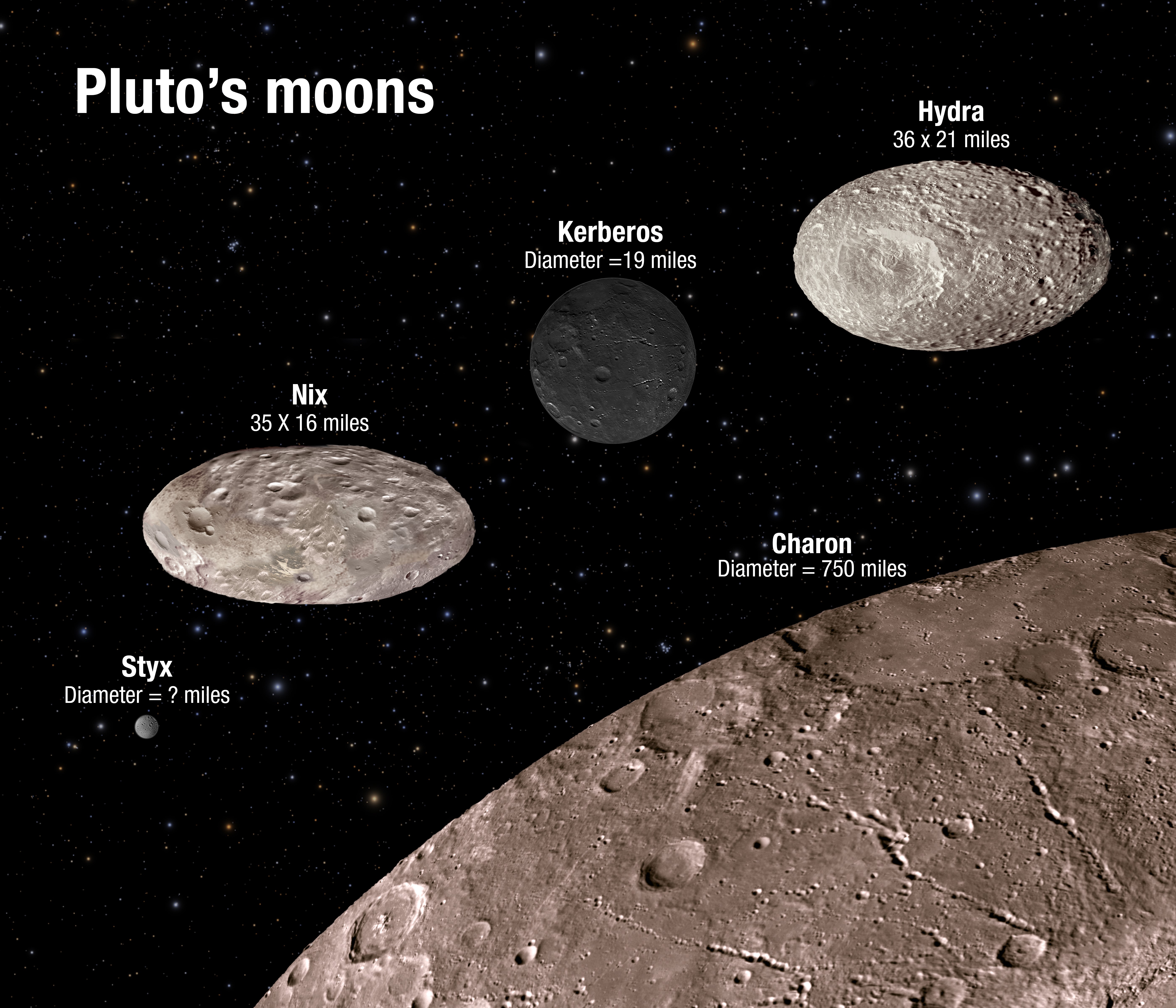 This illustration shows the scale and comparative brightness of Pluto’s small satellites. The surface craters are for illustration only and do not represent real imaging data. Credit: NASA/ESA/A. Feild (STScI)

Pluto’s moons are believed to have been formed by a collision between the dwarf planet and a similar-sized body early in the history of our solar system. The smashup flung material that consolidated into the family of moons observed around Pluto today. Its binary companion, Charon, is almost half the size of Pluto and was discovered in 1978. Hubble discovered Nix and Hydra in 2005, Kerberos in 2011, and Styx in 2012. These little moons, measuring just tens of miles in diameter, were found during a Hubble search for objects that could be hazards to the New Horizons spacecraft as it passes the dwarf planet in July.

Researchers say a combination of Hubble data monitoring and New Horizon’s brief close-up look, as well as future observations with NASA’s James Webb Space Telescope will help settle many mysteries of the Pluto system. No ground-based telescopes have yet been able to detect the smallest moons.

“Pluto will continue to surprise us when New Horizons flies past it in July,” Showalter said. “Our work with the Hubble telescope just gives us a foretaste of what’s in store.”

The Hubble Space Telescope is a project of international cooperation between NASA and the European Space Agency. NASA’s Goddard Space Flight Center in Greenbelt, Maryland, manages the telescope. The Space Telescope Science Institute (STScI) in Baltimore conducts Hubble science operations. STScI is operated for NASA by the Association of Universities for Research in Astronomy, Inc., in Washington.