NASA’s Hubble Space Telescope took direct ultraviolet images of the icy moon Europa transiting across the disk of Jupiter. Out of 10 observations, Hubble saw what may be water vapor plumes on three of the images. This adds another piece of supporting evidence to the existence of water vapor plumes on Europa; Hubble also detected spectroscopic signatures of water vapor in 2012. Credit: Goddard/Katrina Jackson

The observation increases the possibility that missions to Europa may be able to sample Europa’s ocean without having to drill through miles of ice.

“Europa’s ocean is considered to be one of the most promising places that could potentially harbor life in the solar system,” said Geoff Yoder, acting associate administrator for NASA’s Science Mission Directorate in Washington. “These plumes, if they do indeed exist, may provide another way to sample Europa’s subsurface.”

The plumes are estimated to rise about 125 miles (200 kilometers) before, presumably, raining material back down onto Europa’s surface. Europa has a huge global ocean containing twice as much water as Earth’s oceans, but it is protected by a layer of extremely cold and hard ice of unknown thickness. The plumes provide a tantalizing opportunity to gather samples originating from under the surface without having to land or drill through the ice.

The team, led by William Sparks of the Space Telescope Science Institute (STScI) in Baltimore observed these finger-like projections while viewing Europa’s limb as the moon passed in front of Jupiter.

The original goal of the team’s observing proposal was to determine whether Europa has a thin, extended atmosphere, or exosphere. Using the same observing method that detects atmospheres around planets orbiting other stars, the team realized if there was water vapor venting from Europa’s surface, this observation would be an excellent way to see it.

“The atmosphere of an extrasolar planet blocks some of the starlight that is behind it,” Sparks explained. “If there is a thin atmosphere around Europa, it has the potential to block some of the light of Jupiter, and we could see it as a silhouette. And so we were looking for absorption features around the limb of Europa as it transited the smooth face of Jupiter.”

In 10 separate occurrences spanning 15 months, the team observed Europa passing in front of Jupiter. They saw what could be plumes erupting on three of these occasions. 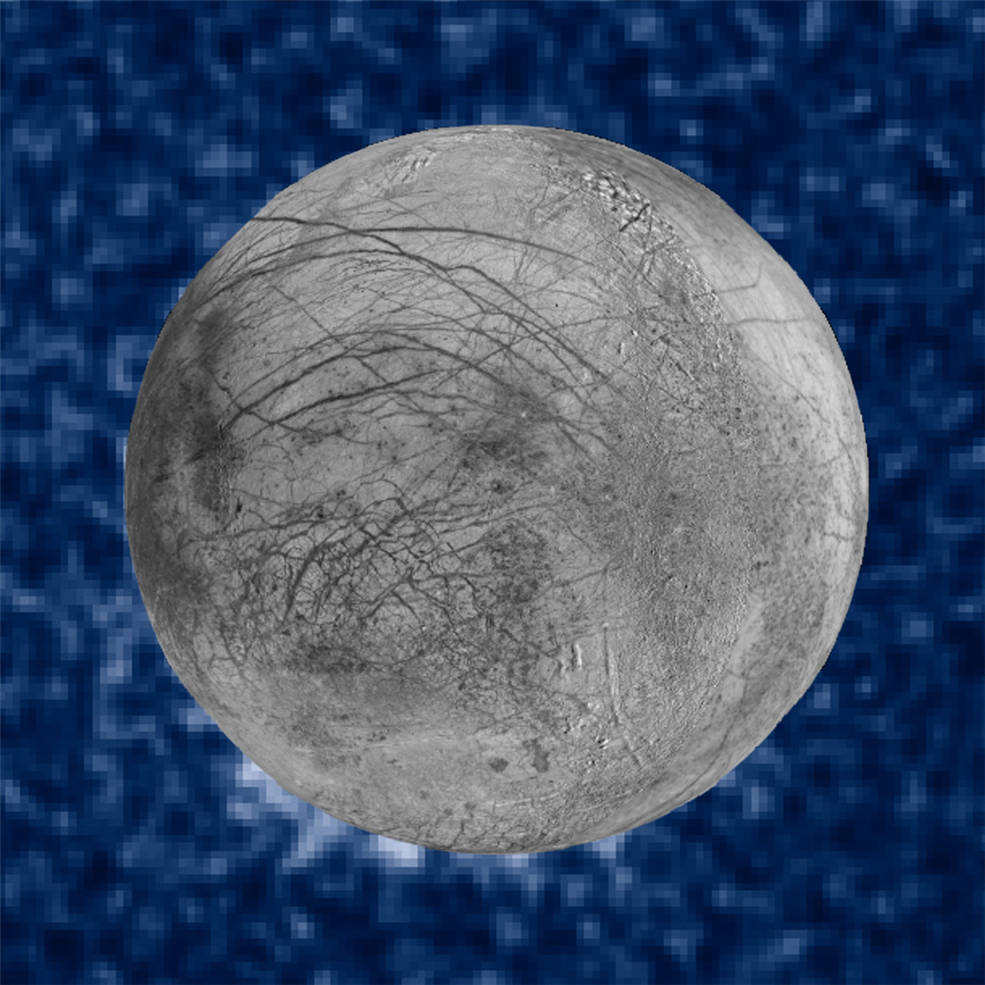 This composite image shows suspected plumes of water vapor erupting at the 7 o’clock position off the limb of Jupiter’s moon Europa. The plumes, photographed by NASA’s Hubble’s Space Telescope Imaging Spectrograph, were seen in silhouette as the moon passed in front of Jupiter. Hubble’s ultraviolet sensitivity allowed for the features — rising over 100 miles (160 kilometers) above Europa’s icy surface — to be discerned. The water is believed to come from a subsurface ocean on Europa. The Hubble data were taken on January 26, 2014. The image of Europa, superimposed on the Hubble data, is assembled from data from the Galileo and Voyager missions. Credit: NASA/ESA/W. Sparks (STScI)/USGS Astrogeology Science Center

This work provides supporting evidence for water plumes on Europa. In 2012, a team led by Lorenz Roth of the Southwest Research Institute in San Antonio, detected evidence of water vapor erupting from the frigid south polar region of Europa and reaching more than 100 miles (160 kilometers) into space. Although both teams used Hubble’s Space Telescope Imaging Spectrograph instrument, each used a totally independent method to arrive at the same conclusion.

“When we calculate in a completely different way the amount of material that would be needed to create these absorption features, it’s pretty similar to what Roth and his team found,” Sparks said. “The estimates for the mass are similar, the estimates for the height of the plumes are similar. The latitude of two of the plume candidates we see corresponds to their earlier work.”

But as of yet, the two teams have not simultaneously detected the plumes using their independent techniques. Observations thus far have suggested the plumes could be highly variable, meaning that they may sporadically erupt for some time and then die down. For example, observations by Roth’s team within a week of one of the detections by Sparks’ team failed to detect any plumes.

If confirmed, Europa would be the second moon in the solar system known to have water vapor plumes. In 2005, NASA’s Cassini orbiter detected jets of water vapor and dust spewing off the surface of Saturn’s moon Enceladus.

Scientists may use the infrared vision of NASA’s James Webb Space Telescope, which is scheduled to launch in 2018, to confirm venting or plume activity on Europa. NASA also is formulating a mission to Europa with a payload that could confirm the presence of plumes and study them from close range during multiple flybys.

“Hubble’s unique capabilities enabled it to capture these plumes, once again demonstrating Hubble’s ability to make observations it was never designed to make,” said Paul Hertz, director of the Astrophysics Division at NASA Headquarters in Washington. “This observation opens up a world of possibilities, and we look forward to future missions — such as the James Webb Space Telescope — to follow up on this exciting discovery.”

The work by Sparks and his colleagues will be published in the Sept. 29 issue of the Astrophysical Journal.

The Hubble Space Telescope is a project of international cooperation between NASA and ESA (the European Space Agency.) NASA’s Goddard Space Flight Center in Greenbelt, Maryland, manages the telescope. STScI, which is operated for NASA by the Association of Universities for Research in Astronomy in Washington, conducts Hubble science operations.

For images and more information about Europa and Hubble, visit: