In October 2008, NEA 2008 TC3 became the first asteroid discovered telescopically before entry and subsequently observed as it exploded in the atmosphere. It was also was the source of recovered meteorites.

Now a second similar-size NEA, 2014 AA, has also been discovered before impact. It is similar in size to 2008 TC3 and was discovered on the first day of the New Year by that Catalina Sky Survey in Arizona. It impacted less than a day later over the Atlantic. However, unlike 2008 TC3, there were few additional telescopic observations and no effort was made to observe the impact.

Figure 1 – This animated GIF shows Asteroid 2014 AA, discovered by the NASA-sponsored Catalina Sky Survey on Jan. 1, 2014, as it moved across the sky. Image credit: CSS/LPL/UA

Several sources confirm that the first discovered asteroid in 2014, designated 2014 AA, entered Earth’s atmosphere late Jan. 1 (Jan. 2 Universal time) over the mid-Atlantic Ocean. The Catalina Sky Survey operating near Tucson, Ariz. discovered this very small asteroid — 6 to 9 feet (2 to 3 meters) in size — early on the morning of Jan. 1, and immediately followed up on it. (An animation of the discovery images is shown in Figure 1). The asteroid entered Earth’s atmosphere about 21 hours later, and probably broke up.

The high-precision astrometry data and rapid follow-up observations provided by the Catalina Sky Survey team made it possible for orbit analysts from NASA’s Near-Earth Object Program Office at the Jet Propulsion Laboratory in Pasadena, Calif., to determine possible Earth impact locations. Before that, and based upon the Catalina Sky Survey observations, Steve Chesley of JPL produced a plot of the possible impact locations for asteroid 2014 AA. (Chesley’s graphic is shown in Figure 2, where the blue, nearly horizontal band represents the region of possible impacts). 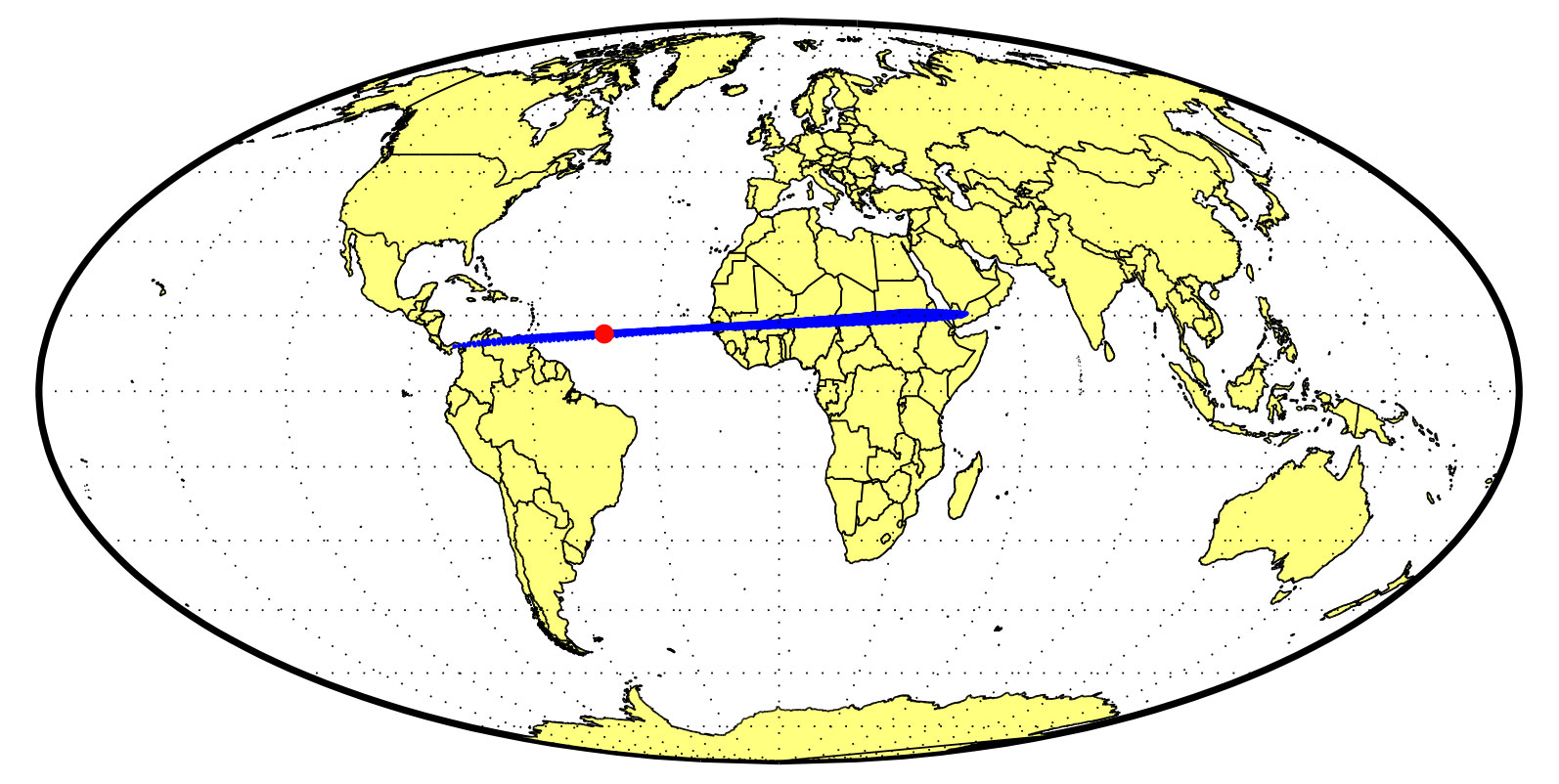 Figure 2 – This global map depicting possible impact locations of asteroid 2014 AA(blue band) is based on Catalina Sky Survey images. The most probable impact location, based on infrasound data, is depicted by the red dot to the left of center on the blue band. Image Credit: NASA/JPL-Caltech.

The geolocation derived by Chesley allowed Peter Brown of the University of Western Ontario, and Petrus Jenniskens of the SETI Institute, Mountain View, Calif., to search the data from low-frequency infrasound observation sites of the Comprehensive Nuclear-Test-Ban Treaty Organization. They found weak signals from stations in Bolivia, Brazil and Bermuda that indicated that the likely impact location was indeed positioned within the predicted area. The location, marked with a red dot, is still somewhat uncertain due to observational factors, including atmospheric effects on the propagation of infrasound signals.

Infrasound stations record ultra-low-frequency sound waves to monitor the location of atmospheric explosions. These sites often pick up airbursts from small asteroid impacts, commonly called fireballs or bolides. There are about a billion near-Earth objects in the size range of 2014 AA, and impacts of comparably sized objects occur several times each year.

Uncertainties present in the infrasound technique and the very limited amount of optical tracking data before impact make it difficult to pinpoint the impact time and location. Even so, Chesley provides the following estimate:

This information is preliminary and has uncertainties of perhaps a few hundred kilometers, or miles, in location, and tens of minutes in time.

Prior to impact, the orbit of 2014 AA had a very low inclination (about 1 degree) with respect to the ecliptic plane and an orbit that ranged from 0.9 to 1.3 astronomical units from the sun, with an orbital period of about 1.2 years.

Early Wednesday morning (Jan. 1, 2014), while New Year’s 2014 celebrations were still underway in the United States, the Catalina Sky Survey near Tucson, Ariz., collected a single track of observations with an immediate follow-up on what was possibly a very small asteroid — 7 to 10 feet (2 to 3 meters) in size — on a potential impact trajectory with Earth.

Designated 2014 AA, which would make it the first asteroid discovery of 2014, the track of observations on the object allowed only an uncertain orbit to be calculated. However, if this was a very small asteroid on an Earth-impacting trajectory, it most likely entered Earth’s atmosphere sometime between 11 a.m. PST (2 p.m. EST) Wednesday and 6 a.m. PST (9 a.m. EST) Thursday.

Using the only available observations, three independent projections of the possible orbit by the independent orbit analyst Bill Gray, the Minor Planet Center in Cambridge, Mass., and Steve Chesley, of NASA’s Near-Earth Object Program Office at the Jet Propulsion Laboratory in Pasadena, Calif., are in agreement that 2014 AA would hit Earth’s atmosphere. According to Chesley, the potential impact locations are widely distributed because of the orbit uncertainty, falling along an arc extending from Central America to East Africa. The most likely impact location of the object was just off the coast of West Africa at about 6 p.m. PST (9 p.m. EST) Jan. 1.

It is unlikely asteroid 2014 AA would have survived atmospheric entry intact, as it was comparable in size to asteroid 2008 TC3, which was about 7 to 10 feet (2 to 3 meters) in size. 2008 TC3 completely broke up over northern Sudan in October 2008. Asteroid 2008 TC3 is the only other example of an object discovered just prior to hitting Earth. So far, there have been a few weak signals collected from infrasound stations in that region of the world that are being analyzed to see if they could be correlated to the atmospheric entry of 2014 AA.

NASA’s Near-Earth Object Program at NASA Headquarters, Washington, manages and funds the search, study and monitoring of asteroids and comets whose orbits periodically bring them close to Earth. JPL manages the Near-Earth Object Program Office for NASA’s Science Mission Directorate in Washington. JPL is a division of the California Institute of Technology in Pasadena.

NEO News is an informal compilation of news and opinion dealing with Near Earth Objects (NEOs) and their impacts. These opinions are the responsibility of the individual authors and do not represent the positions of NASA, Ames Research Center, the International Astronomical Union, or any other organization. For additional information, please see the website https://impact.arc.nasa.gov. If anyone wishes to copy or redistribute original material from these notes, fully or in part, please include this disclaimer.