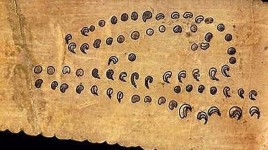 The Oldest Lunar Calendars and Earliest Constellations have been identified in cave art found in France and Germany. The astronomer-priests of these late Upper Paleolithic Cultures understood mathematical sets, and the interplay between the moon annual cycle, ecliptic, solstice and seasonal changes on earth.

The First (Lunar) Calendar
The archaeological record’s earliest data that speaks to human awareness of the stars and ‘heavens’ dates to the Aurignacian Culture of Europe, c.32,000 B.C. Between 1964 and the early 1990s, Alexander Marshack published breakthrough research that documented the mathematical and astronomical knowledge in the Late Upper Paleolithic Cultures of Europe. Marshack deciphered sets of marks carved into animal bones, and occasionally on the walls of caves, as records of the lunar cycle. These marks are sets of crescents or lines. Artisans carefully controlled line thickness so that a correlation with lunar phases would be as easy as possible to perceive. Sets of marks were often laid out in a serpentine pattern that suggests a snake deity or streams and rivers. 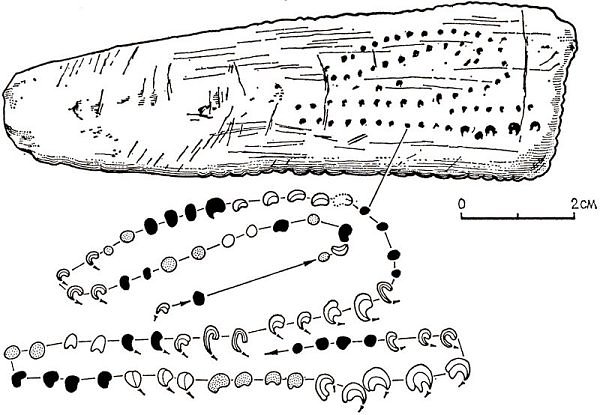 Hunting the largest animals was arduous, and might require hunters to follow herds of horses, bison, mammoth or ibex for many weeks. (Other big animals such as the auroch, cave bear and cave lion were well known but rarely hunted for food because they had special status in the mythic realm. The Auroch is very important to the search for earliest constellations.)

The phases of the moon depicted in these sets of marks are inexact. Precision was impossible unless all nights were perfectly clear which is an unrealistic expectation. The arithmetic counting skill implied by these small lunar calendars is obvious. The recognition that there are phases of the moon and seasons of the year that can be counted – that should be counted because they are important – is profound.

“All animal activities are time factored, simply because time passes, the future is forever arriving. The reality of time factoring is objective physics and does not depend upon human awareness or consciousness. Until Marshack’s work, many archeologists believed the sets of marks he chose to study were nothing but the aimless doodles of bored toolmakers. What Marshack uncovered is the intuitive discovery of mathematical sets and the application of those sets to the construction of a calendar.”

Bone is the preferred medium because it allows for easy transport and a long calendar lifetime. Mankind’s earliest astronomy brought the clan into the multi-dimensional universe of the gods. Objects used in the most potent rituals had the highest contextual, cultural value and were treated with great reverence.

Continue reading about images of lunar notations with animal and mythic imagery here.