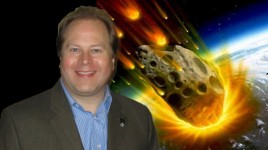 US astronomer William F. Bottke has been awarded the prize instituted in honor of Italian astronomer Paolo Farinella (1953-2000). The award ceremony was held at the international DPS/EPSC Joint Meeting on Planetary Sciences currently under way in Nantes (France).

William Bottke is director of NASA’s Center for Lunar Origin and Evolution at the Southwest Research Institute in Boulder, Colorado. He was awarded the prize for his research into the dynamics of asteroids and their link with meteorites, carrying on the legacy of Paolo Farinella who devoted a large part of his life to the study of asteroids.

On receiving the news of the award, William Bottke said, “Receiving a prize in honor of Paolo means a lot to me. Paolo was a great inspiration to me and I have very fond memories of the many discussions I had with him when we met at conferences. I’m convinced that much of the research that I have carried out was inspired in one way or another by Paolo’s insights.”

About the “Paolo Farinella” Prize

To honor the memory and the outstanding figure of Paolo Farinella (1953–2000), an extraordinary scientist and person, a prize is established in recognition of significant contributions given in the fields of interest of Paolo, which span from planetary sciences to space geodesy, fundamental physics, science popularization, and security in space, weapons control and disarmament.

The prize has been proposed during the “International Workshop on Paolo Farinella the scientist and the man”, held in Pisa in 2010; it is supported by the University of Pisa, by the Space Academy Foundation, by IASF-INAF and IFSI-INAF (Rome).

The Space Academy Foundation was created by Telespazio and Thales Alenia Space (the two companies that make up the Space Alliance between Finmeccanica and Thales), SELEX Elsag (Finmeccanica) and the University of L’Aquila in 2008 as a non-profit organization to pursue the objectives of higher education and research and development in space activities.

The first edition of the Farinella Prize is devoted to planetary science and specifically to the physical and dynamical characterization of small solar system bodies, which was a major research interest in Paolo’s career. The award ceremony was hosted by the EPSC-DPS joint meeting in Nantes, France (03–07 October 2011).

For the 1st “Paolo Farinella” Prize the terms and rules are as follows:

* A competition is announced to award the “Paolo Farinella” Prize for the year 2011. The prize consists of a medal, a certificate and the sum of €5000. The winner will be asked to give a Prize lecture.
* The winner will be selected on the basis of his/her overall research results in the field of “physics and dynamics of small solar system bodies”.
* The nominations for the “Paolo Farinella” Prize can be made by any researcher that works in the field of planetary sciences following the indications in the attached form. Self nominations are acceptable. The candidates should have international and interdisciplinary collaborations and not be older than 47 years, the age of Paolo when he passed away.
* Nominations must be sent by email not later than 30 June 2011, at the following address: prize.paolofarinella@dm.unipi.it
* The winner of the prize will be selected before 15 July 2011 by the “Paolo Farinella” Prize Committee composed of 6 outstanding scientists in planetary sciences, with specific experience in solar system small bodies.
* The selection committee will consider all the nominations, but will be entitled to consider autonomously other candidates.

Dr. William Bottke is the Assistant Director of the Department for Space Studies at Southwest Research Institute (SwRI) in Boulder, Colorado. Dr. Bottke is also the Director of the Center for Lunar Origin and Evolution (CLOE) of NASA’s Lunar Science Institute. His research interests include the collisional and dynamical evolution of small body populations throughout the solar system (e.g., asteroids, comets, irregular satellites, Kuiper belt objects, meteoroids, dust) and the formation and bombardment history of planetesimals, planets and satellites. He is also interested in how near-Earth objects (NEOs) are delivered from their source regions in various asteroid and cometary populations to their observed orbits. He received a B.S. in Physics and Astrophysics from the University of Minnesota in 1988 and a Ph.D. in Planetary Science from the University of Arizona in 1995. He is the 5th Café speaker from that Arizona group! (the others are Drs. Grinspoon, Ellingson, Schneider, and Spencer). He has also been a postdoctoral fellow at both Caltech (1996-1997) and Cornell University (1997-2000).