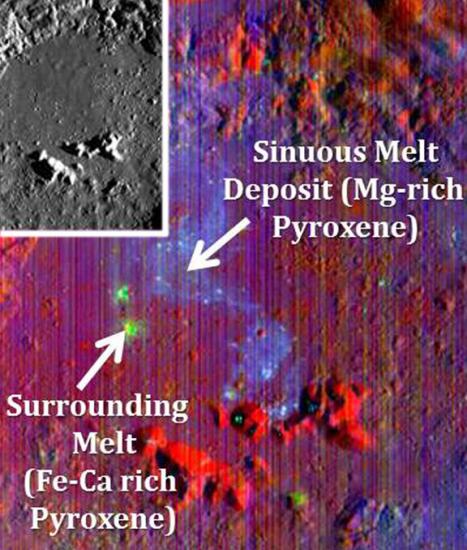 Pre-existing mineral deposits on the Moon (sinuous melt, above) have survived impacts powerful enough to melt rock. Not detectable in the crater image (inset), deposits are visible only in light at certain wavelengths. Credit: NASA and Deepak Dhingra

Large impacts on the Moon can form wide craters and turn surface rock liquid. Geophysicists once assumed that liquid rock would be homogenous when it cooled. Now researchers have found evidence that pre-existing mineralogy can survive impact melt.

Despite the unimaginable energy produced during large impacts on the Moon, those impacts may not wipe the mineralogical slate clean, according to new research led by Brown University geoscientists.

The researchers have discovered a rock body with a distinct mineralogy snaking for 18 miles across the floor of Copernicus crater, a 60-mile-wide hole on the Moon’s near side. The sinuous feature appears to bear the mineralogical signature of rocks that were present before the impact that made the crater.

The deposit is interesting because it is part of a sheet of impact melt, the cooled remains of rocks melted during an impact. Geologists had long assumed that melt deposits would retain little pre-impact mineralogical diversity.

Large impacts produce giant cauldrons of impact melt that eventually cool and reform into solid rock. The assumption was that the impact energy would stir that cauldron thoroughly during the liquid phase, mixing all the rock types together into an indistinguishable mass. Identifying any pre-impact mineral variation would be a bit like dumping four-course meal into a blender and then trying to pick out the potatoes.

But this distinct feature found at Copernicus suggests that pre-existing mineralogy isn’t always blended away by the impact process.

“The takeaway here is that impact melt deposits aren’t bland,” said Deepak Dhingra, a Brown graduate student who led the research. “The implication is that we don’t understand the impact cratering process quite as well as we thought.”

The findings are published in online early view in the journal Geophysical Research Letters.

Copernicus is one of the best-studied craters on the Moon, yet this deposit went unnoticed for decades. It was imaging in 83 wavelengths of light in the visible and near-infrared region by the Moon Mineralogy Mapper — M3 — that made the deposit stand out like a sore thumb.

M3 orbited the Moon for 10 months during 2008-09 aboard India’s Chandrayaan-1 spacecraft and mapped nearly the whole lunar surface. Different minerals reflect light in different wavelengths at variable intensities. So by looking at the variation at those wavelengths, it’s possible to identify minerals.

In the M3 imaging of Copernicus, the new feature appeared as an area that reflects less light at wavelengths around 900 and 2,000 nanometers, an indicator of minerals rich in magnesium pyroxenes. In the rest of the crater floor, there was a dominant dip beyond 950 nm and 2400 nm, indicating minerals rich in iron and calcium pyroxenes. “That means there are atleast two different mineral compositions within the impact melt, something previously not known for impact melt on the Moon,” Dhingra said.

It is not clear exactly how or why this feature formed the way it did, the researchers say. That’s an area for future study. But the fact that impact melt isn’t always homogenous changes the way geologists look at lunar impact craters.

“These features have preserved signatures of the original target material, providing ‘pointers’ that lead back to the source region inside the crater,” said James W. Head III, the Scherck Distinguished Professor of Geological Sciences and one of the authors of the study. “Deepak’s findings have provided new insight into the fundamentals of how the cratering process works. These results will now permit a more rigorous reconstruction of the cratering process to be undertaken.”

Carle Pieters, a professor of geological sciences at Brown and the principal investigator of the M3 experiment, was one of the co-authors on the paper, with Peter Isaacson of the University of Hawaii.