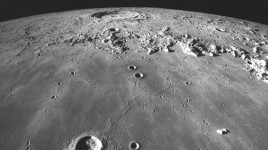 At the 2011 Annual Meeting of the Lunar Exploration Analysis Group, Dhingra et al. report on the MG-SPINEL RICH LITHOLOGY AT COPERNICUS CRATER.

The diverse mineralogy of the Moon is an indicator of its origin and evolution through time. Mapping the distribution of minerals in the spatial context (both horizontal and vertical) provides clues to the history of the planet. Lunar sample analysis and remote sensing studies over the past several decades have established the dominant mineralogy of the Moon, mainly comprising of minerals like plagioclase, low and high calcium pyroxene and olivine.

Recent remote sensing observations by Moon Mineralogy Mapper (M3) have added a new lithology to the lunar suite, one dominantly composed of Mg- Spinel. The detections have been made over a small areal extent at only two locations so far, namely, innermost ring of Moscoviense basin on the lunar far side and central peaks of crater Theophilus on the near side.

New identification of Mg-spinel lithology at Copernicus crater using M3 data (the third detection so far) has implications for the understanding of this lithology.

Mg-Spinel at Copernicus Crater: The spectral signature of Mg-Spinel is characterized by an absence of an absorption band around 1000 nm and a strong absorption around 2000 nm caused by small amounts of Fe2+ in the tetrahedral crystallographic site of the mineral. At Copernicus, the Mg-Spinel lithology bears this distinct spectral signature, as is illustrated in Fig. 1 by the magenta spectrum. The surrounding area displays a relatively featureless spectrum (blue spectrum). Spectra from Mg-Spinel rich lithology at Theophilus has been provided for comparison. 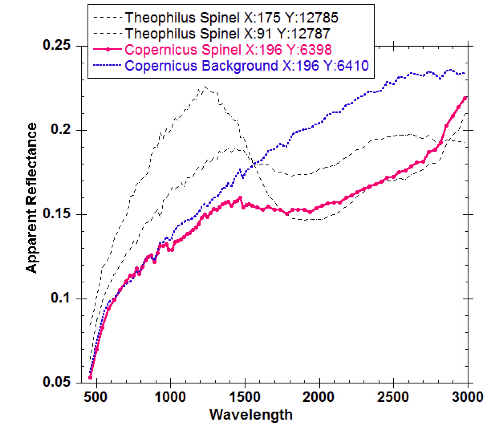 Fig. 1 Reflectance Spectrum of the MG-Spinel lithology at Copernicus Crater (shown in magenta color) with latest M3 calibration (U2 with RC correction). Mg-Spinel spectra from two locations at Theophilus are shown in black dashed spectra.

Geological Setting: Copernicus is a ~90 km diameter, relatively young, bright rayed-crater on the lunar near side with prominent central peaks. The floor of Copernicus is inundated with impact melts displaying diverse morphologies. The Mg-Spinel bearing lithology occurs as a small hillock on the floor of Copernicus crater, located south of the triplet peak complex. It is not clear based on the available dataset, if this small hillock was originally a part of the central peaks or is just an isolated block exposed by the cratering event. At the same time, it is also noted that the hillock is aligned with the western peak of the crater as can be seen in figure 2(a). Spectrally, on an integrated band strength at 2000 nm (IBD 2000) map – an indicator of the relative strength of the 2000 nm absorption band, the Mg-Spinel rich lithology occurs as a bright spot in an otherwise dark surrounding (Fig. 2b). 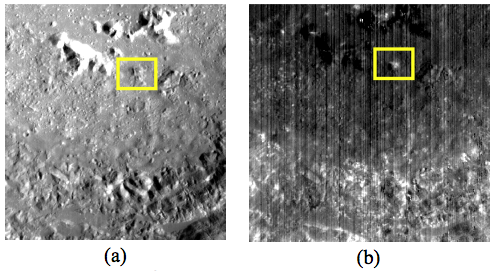 Fig. 2 (a) M3 albedo and (b) IBD 2000 map of the Copernicus crater showing the newly identified Mg-Spinel location

High Resolution Studies: The Mg-Spinel rich lithology was examined at higher spatial resolution to better determine the morphological relations. Kaguya Terrain Camera (TC) data and LROC-NAC datasets were used for this study. Figure 3 shows TC and LROC-NAC scenes of the area indicating a boulder strewn region across the slopes of this hillock. These boulders might be the source of the strong 2000 nm absorptions observed in M3 dataset.

Copernicus crater lies beyond the southern margin of Imbrium basin and is believed to have excavated through the pre-existing Insularum basin. The olivine bearing central peaks at Copernicus crater have been interpreted to be of deep seated origin and therefore there is a possibility of the Mg-spinel rich block to have come from deeper source regions and could represent: (a) uplifted part of the central peaks of Copernicus (b) uplifted block from Insularum basin or (c) displaced block from Imbrium basin, although the last possibility is less likely in view of the great distance from Imbrium transient crater rim. In either of the cases, the hypothesis of association of Mg-Spinel rich lithology with deep excavation by large basins seems to be a viable option. Further detailed studies including a search for any additional exposures in the area needs to be carried out for better understanding of the geology of Mg-Spinel rich lithology.

Summary: The new identification of Mg-Spinel rich lithology at Copernicus crater provides another set of clues in understanding the occurrence of this new rock type. Preliminary analysis of mineralogy and morphology seem to support the suggestion that it may represent a deep seated lithology which is excavated along the inner rings of large basins, either in-situ (as in case of Moscoviense and Theophilus) or as displaced blocks (as might possibly be at Copernicus). 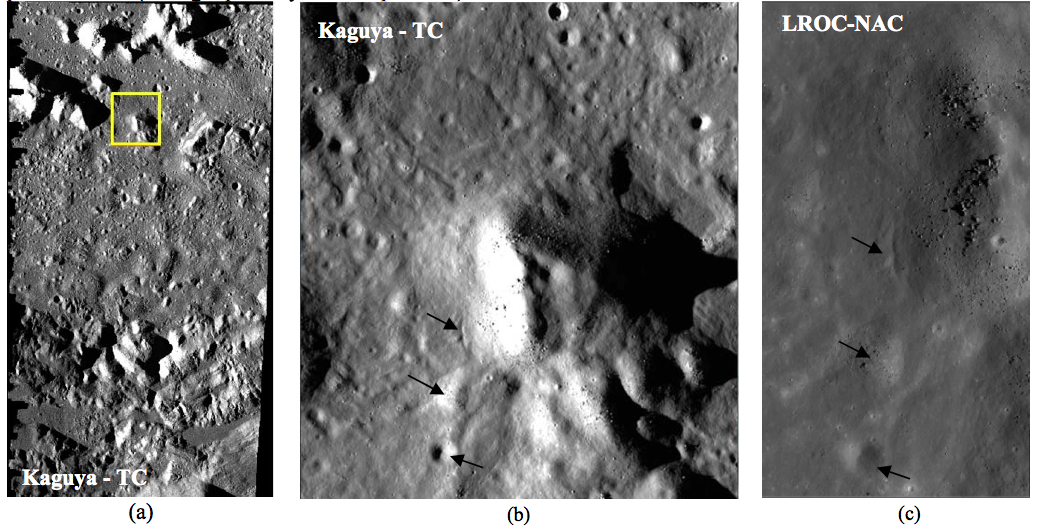 Fig. 3 High resolution morphological observations of the Mg-Spinel rich lithology. (a) Kaguya TC image with the Mg-Spinel bearing lithology enclosed in the yellow box. (b) The area enclosed in 3(a) at full resolution. (c) The same area in LROC-NAC image. The outcropping boulders can be observed in all the cases. The arrows in 3b and 3c refer to the same locations in the two images.