According to a new study published in Nature Communications, most of the water inside the Moon was delivered by asteroids (not comets) during the early evolution of the Moon, approximately 4.5-4.3 billion years ago.

In the Apollo era, the Moon was often described as being devoid of water. As analytical techniques improved, scientists realized that water resided in the lunar interior, but in quantities that had simply been impossible to detect when lunar samples were originally returned to Earth. The discovery of water in lunar samples prompted a new question: what was the source of the Moon’s water? 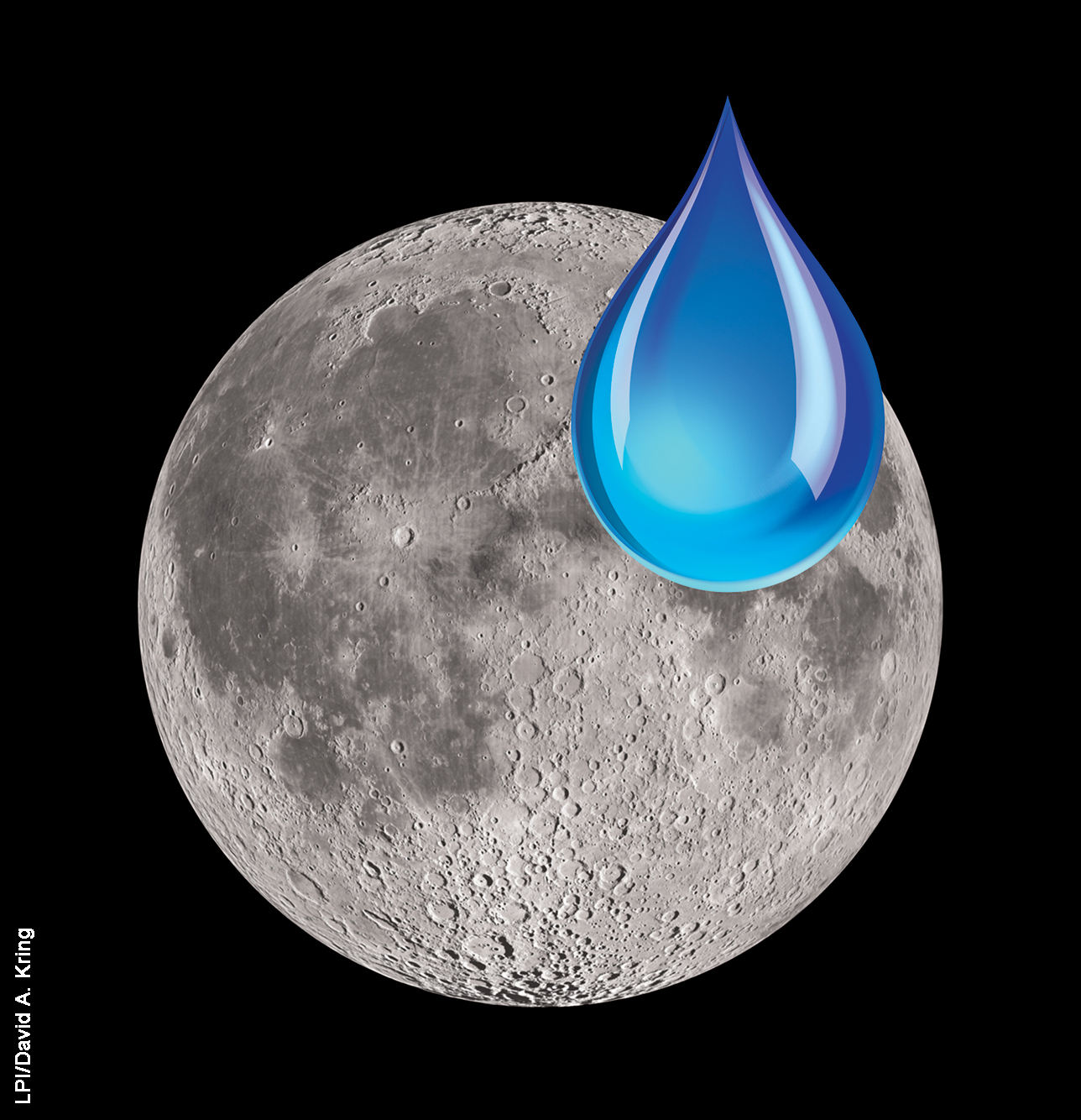 The Moon contains small, but potentially significant amounts of water. Rock samples collected by the Apollo astronauts suggest the interior of the Moon contains 10 to 300 parts per million (ppm) water. Although that is not a lot of water, when it is vented to the surface by volcanic and impact cratering events, it may have been concentrated in permanently shadowed and very cold regions on the lunar surface. Scientists are intrigued by the source of that water and when the Moon acquired it. Did the material come from asteroids, comets, or some other source? Lurking in the answer to that question may be additional clues about how the Solar System formed, how the Moon accreted, and how impact bombardment affected the Moon when it was transitioning from a molten mass to a planetary body with a substantially-solid crust. Credit: LPI/David A. Kring

In the current study, an international science team compared the chemical and isotopic composition of lunar volatiles (including water) with those of volatile materials in comets and meteoritic samples of asteroids. They then calculated the proportion of water that could have been delivered by those two populations of objects. Their results indicate that most (>80 %) of the water in the lunar interior was derived from asteroids that are similar to carbonaceous chondritic meteorites. That water was delivered when the Moon was still surrounded by a magma ocean and before a massive crust (now seen as the bright white highlands of the Moon) prevented impacting objects from delivering significant amounts of material to the lunar interior. A similar delivery of water to the Earth would have been occurring within this same interval of time. 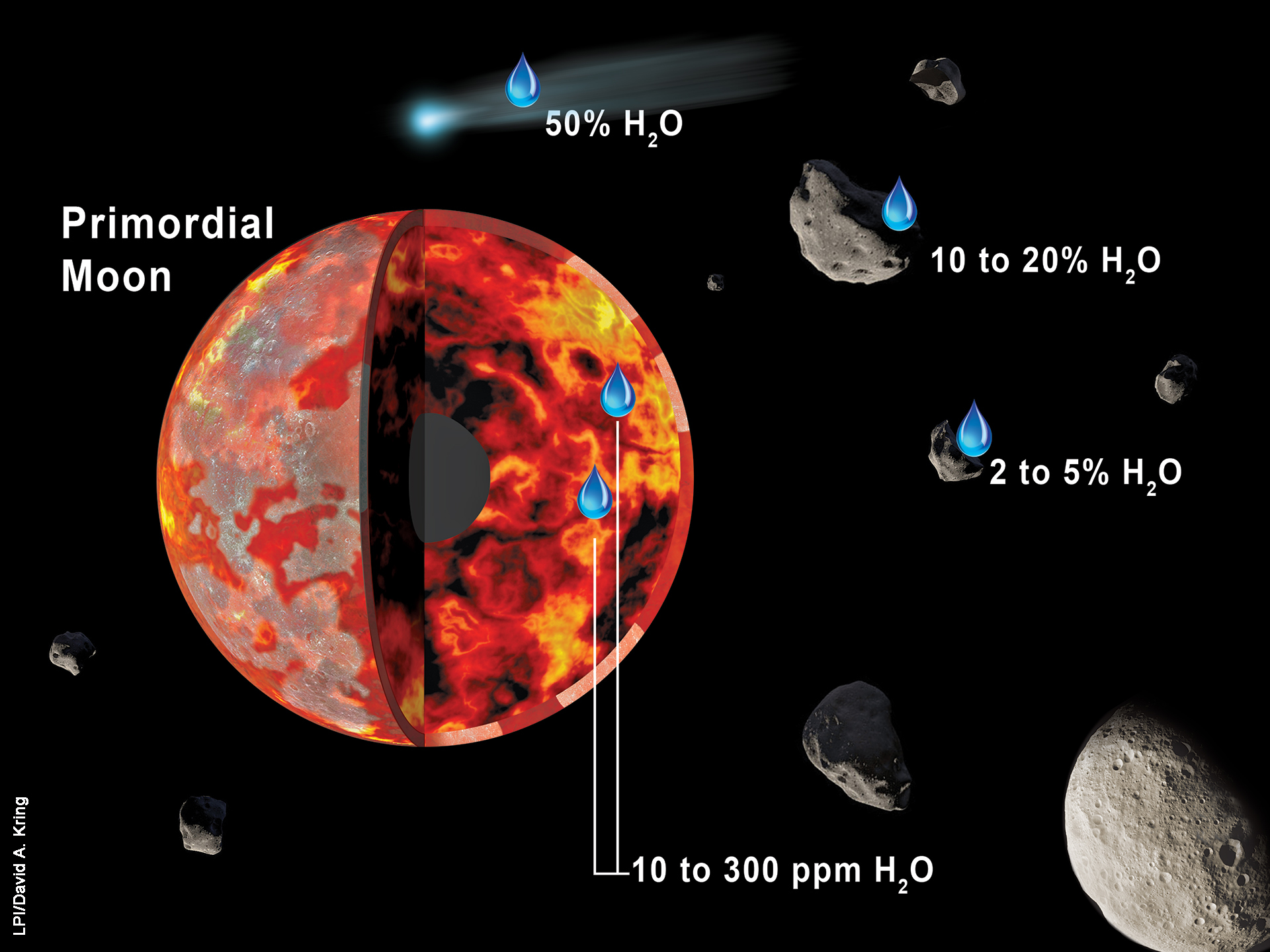 The Moon may have obtained water when it was still partially molten (red to orange regions) and its primordial crust (gray to white regions on surface) was forming. At that time, the Moon was being pummeled by impacting asteroids and comets that could deposit water into the lunar interior. The isotopic compositions of volatile elements in samples from the Moon suggest asteroids were the dominant source of that water. In particular, the asteroids seem to have been similar to water-rich CI, CM, and CO carbonaceous meteorites. The CI and CM types of meteorites contain 10 to 20% water. Other types of carbonaceous meteorites, including CO type meteorites, contain 2 to 5% water. Water-poor asteroids, which were also hitting the Moon, would have delivered very little water. Although comets may contain more water (perhaps 50%) than asteroids, their isotopic compositions do not match that of the Moon’s volatile elements. Thus, less than 20% of the Moon’s interior water appears to be from comets. Credit: LPI/David A. Kring

The first author, Dr. Barnes, is a former graduate student intern in the CLSE Lunar Exploration Summer Intern Program, is currently a CLSE postdoctoral international partner, and is an incoming postdoctoral researcher at the NASA Johnson Space Center and the Lunar and Planetary Institute, which is managed by USRA for NASA.

Dr. Kring’s portion of the work was supported at the Lunar and Planetary Institute by cooperative agreements to the Universities Space Research Association from NASA’s Planetary Science Division and NASA’s Solar System Exploration Research Virtual Institute.

About USRA
Universities Space Research Association is an independent, nonprofit research corporation where the combined efforts of in-house talent and university-based expertise merge to advance space science and technology. USRA works across disciplines including biomedicine, planetary science, astrophysics, and engineering and integrates those competencies into applications ranging from fundamental research to facility management and operations. USRA engages the creativity and authoritative expertise of the research community to develop and deliver sophisticated, forward-looking solutions to Federal agencies and other government sponsors.

About LPI
The Lunar and Planetary Institute (LPI), a division of the Universities Space Research Association, was established during the Apollo missions to foster international collaboration and to serve as a repository for information gathered during the early years of the space program. Today, LPI is an intellectual leader in lunar and planetary science. The Institute serves as a scientific forum attracting world-class visiting scientists, postdoctoral fellows, students, and resident experts; supports and serves the research community through newsletters, meetings, and other activities; collects and disseminates planetary data while facilitating the community’s access to NASA science; and engages and excites, and educates the public about space science and invests in the development of future generations of explorers. The research carried out at LPI supports NASA’s efforts to explore the solar system.