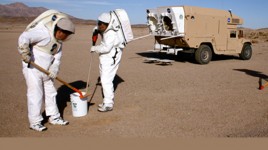 NASA and a team of international researchers from Mars Institute and SETI Institute returned to the Mojave Desert this month to complete a series of field tests and simulations aimed at investigating how humans will conduct geotechnical surveys on the moon or Mars.

The Mojave’s inhospitable, sun-scorched environment presents scientists with perfect opportunities to study locations that are similar to what explorers would find on the moon or Mars. Other research partners include Carnegie Mellon University and aerospace companies Hamilton Sundstrand, Windsor Locks, Conn., and Honeybee Robotics, Pasadena, Calif.

The Mojave simulations were designed to study how an astronaut crew would characterize the geotechnical properties of a site, such as the composition and density of surface materials, their water content and roughness of the terrain. As part of the characterization of the sites by human explorers, soil samples were collected for microbiological analysis. The soil samples will be examined in the laboratory for their microbial content to better understand the astrobiological potential offered by similar environments on Mars.

“Our overall goal was to learn how to scientifically explore and validate, as civil engineers would, open areas on the moon and Mars that might be candidate sites for an outpost or other elements of surface infrastructure,” explained Pascal Lee, chairman of the Mars Institute and leader of the field campaign.

“The Mojave field test was an ideal opportunity to try out the camera before taking it to harsher environments such as the Arctic or Antarctica,” said Randy Sargent of CMU’s Robotics Institute.

As a stand-in for a pressurized rover, the researchers used a U.S. Army maxi-ambulance model of the High Mobility Multipurpose Wheeled Vehicle (HMMWV) or Humvee, much like the ones used on the Haughton-Mars Project on Devon Island in the High Arctic. Humvees are good emulators of pressurized vehicles for the purposes of this field test.

The field test also served as Phase One of a two-phase experiment to investigate how robotic rovers may be used, not in their usual role as scouts, but as follow-up tools deployed in the wake of a human visit to a site.

“We will return in 2012 to the same sites with a robotic rover to study how it can complement and maybe augment initial geotechnical surveys performed by humans,” said Maria Bualat of NASA Ames Research Center, principal investigator of the Robotic Follow-Up Experiment. The experiment is part of a four-year study funded by NASA’s Moon and Mars Analog Missions Activities (MMAMA) Program. 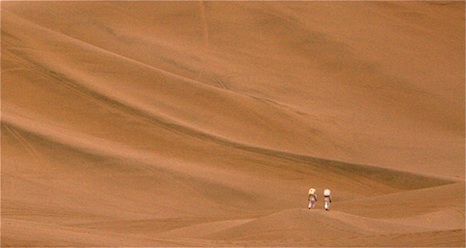 While NASA does not currently have specific plans to send humans to the moon or Mars, the agency is creating a range of versatile capabilities that will offer options for humans to explore different planetary destinations in the future. “We are still a few years away from humans journeying back to the moon or on to Mars, but planning for what we will do there needs to progress, as there are important long lead-time lessons to be learned,” said Lee.

“Field tests such as this one are a win-win for NASA, its partners, and the NTC. They help broaden the training experience we offer our men and women in uniform, promote technical cross-fertilization in field operations, and ultimately allow all partners to meet their goals in more productive and cost-effective ways,” said Cyle Fena, deputy chief of staff for operations and plans at the NTC.

For information about the NASA Ames, visit: https://www.nasa.gov/centers/ames