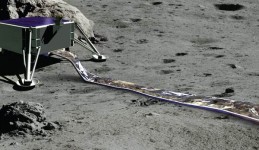 Our Moon is a unique platform from which to conduct measurements of gravitation, the Sun, the lunar ionosphere and interior, and the very early Universe. NLSI’s Lunar University Network for Astrophysics Research (LUNAR) team is addressing the question of how the Moon can be used as a platform to advance important goals in astrophysics, heliophysics, lunar science, the physical sciences, and exploration science.

Scientists can detect the intense radio bursts produced by energetic electrons as they are accelerated close to the Sun, but no one has been able to image this emission more than a few solar radii above the surface of the Sun. Imaging the emission would show where acceleration is occurring, and to forecast if radiation is likely to reach Earth and explorers in space.

Almost all of this radio emission is at frequencies lower than the terrestrial ionospheric cutoff, preventing observation from the ground. To date, radio astronomy capable space missions consist of one or a few satellites, typically far from each other, which measure total power from the radio sources, but cannot produce images with useful angular resolution.

To produce emission images requires arrays of antennas distributed over many wavelengths (hundreds of meters to kilometers) to permit aperture synthesis imaging. Such arrays could be readily implemented with antennas placed on the lunar surface. Studies of interplanetary and lunar dust could also be accomplished by measuring the voltages due to dust impacts on the lunar antennas.

Lack of radio imaging makes it difficult to determine the nature of the interaction, but images with ~2 degree resolution would give precise locations and permit identification of the causal mechanism and the relation to intense SEPs.

Heliophysics science has been tightly coupled with exploration since the beginning of the space program, as scientists work to both understand the physics connecting the Sun and the Earth to the rest of the solar system, and to develop predictive capabilities that enable operational planning for lunar, deep space, and eventually Mars missions.

Renewed robotic and human exploration of the moon creates opportunities for several new classes of experiments on the lunar surface and in lunar orbit that will both provide real-time awareness of space weather conditions during manned missions and advance the field of heliophysics science.

Imaging emissions from a coronal mass ejection with a Radio Observatory on the Lunar Surface would show us where acceleration is occurring, allowing us to determine the coronal conditions that lead to efficient particle acceleration. Observations from the array could also be used in real-time to indicate when a coronal mass ejection has begun to produce radiation. This capability could provide advance warning for astronauts in deep space that a radiation event is imminent, buying valuable time for them to seek shelter.

Although low-density plasmas make up the majority of the solar system and universe, they have never been imaged at high resolution. The Radio Observatory on the Lunar Surface for Solar studies (ROLSS) is a concept designed to provide the first images of the inner solar system at wavelengths longer than those penetrating the terrestrial ionosphere (~30 m). Its key science target is to localize particle acceleration caused by shocks and reconnection in the inner heliosphere, using solar radio burst emission as the “observable.” ROLSS will also measure the temporal and spatial variability of the lunar ionosphere and detect interplanetary and interstellar dust striking the antennas.

The ROLSS concept (Figure below) consists of 3 arms of thin polyimide film, each
500 m in length, radiating from a central hub, providing ~2º angular resolution at 30-m wavelength (10 MHz). The ROLSS array consists of multiple science antennas located near the lunar equator on the near side. Each arm includes 16 dipole antennas, consisting of metal deposited on the film and the transmission lines connecting them to receivers at the central hub. The polyimide film is flexible enough to be stored in a roll during transit and deployed directly on the lunar surface by unrolling. 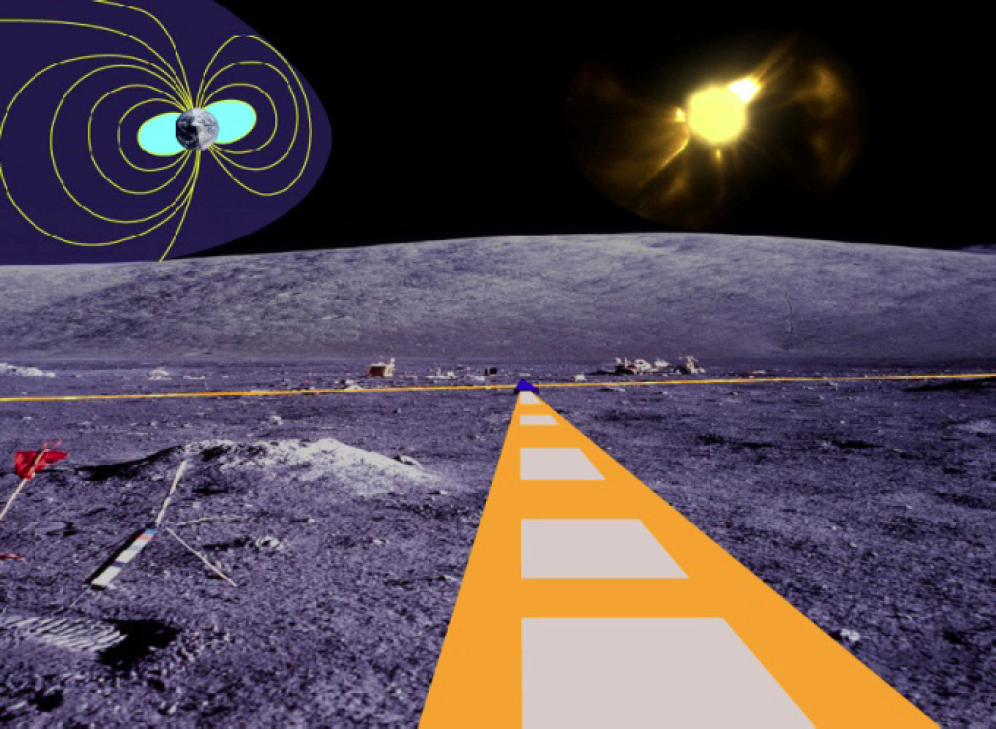 Artist’s concept of ROLSS array on lunar surface. The arm extending towards the reader shows wide linear dipoles on Kapton®. The other two arms are barely visible in the distance. ROLSS could be the first mission to image the sun and celestial sphere at 1-10 MHz. [Credit: J. Kasper/ LUNAR]

These arms could be deployed using a crewed or robotic rover. The data collected by the antennas are processed at the central hub and down-linked to Earth for final radio image synthesis. This antenna system is uniquely suited to the low mass and low volume requirements for delivery to the lunar surface.

The array operates over the wavelength range 30–300 m (1–10 MHz), with a selectable, variable frequency sub-band that can be placed anywhere within the operational wavelength range.

For more information, read the LUNAR team’s white paper on the subject.