In June, five student journalists from Stony Brook University’s Alan Alda Center for Communicating Science packed their hiking boots and hydration packs and headed to Hawaii’s Big Island. There, they joined a NASA-funded science team for 10 days on the lava fields of the very active volcano called Kilauea. The students observed the scientists conducting field work and reported on the experience in words, photos and video. Daily hikes of up to nine miles round-trip taught the journalists to move with confidence across the harsh landscape, keeping eyes peeled for hazards such as a’a – a type of lava that has hardened into unsteady piles of razor-sharp rocks. As the group worked, everyone paid attention to the direction of the wind, which could carry the volcano’s noxious plume toward them, and practiced putting on their respirators just in case. 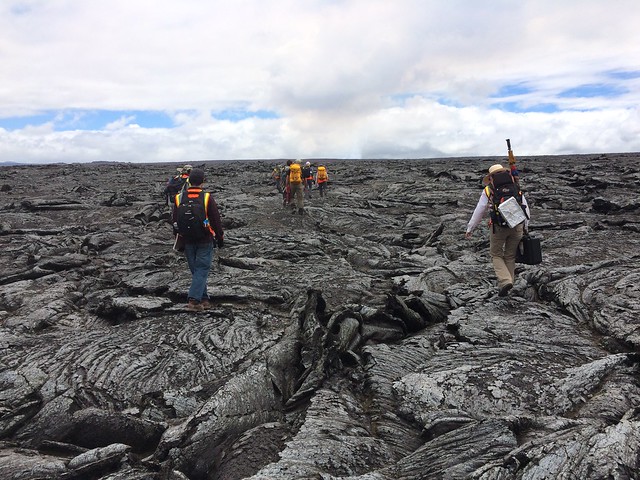 The trip was part of an interdisciplinary program designed to prepare for future exploration of the moon, near-Earth asteroids and the moons of Mars. Called RIS4E – short for Remote, In Situ, and Synchrotron Studies for Science and Exploration – the program develops protocols for using handheld, portable scientific instruments to identify, collect and analyze samples of interest. Geologists Jacob Bleacher and Kelsey Young, a postdoctoral fellow, from NASA’s Goddard Space Flight Center in Greenbelt, Maryland, led the Hawaii trip, which had a total of 23 participants from NASA, Stony Brook University and the Alan Alda Center for Communicating Science. The daily excursions onto the lava field simulated activities that might be conducted on the surface of a moon or asteroid, with the goal of determining how long it would take an exploration crew of two scientists and an astronaut to assess the geology of a site and identify key features. The overall RIS4E project goals also include finding the best ways to identify and collect samples for study back on Earth and to protect astronauts during exploration.

Kilauea’s lava fields are an ideal place to test equipment designed for use on Earth’s moon or Mars, because volcanic activity shaped so much of those terrains. The science team brought an array of handheld instruments to determine which minerals were present and to study the chemistry that had taken place in the rocks and soil. They also investigated the terrain using cameras flown on kites. In the evenings, they’d work through the data to pull out as much detail as they could – a key step in determining how to make the most of the limited time and equipment that a team would have when exploring a site on another planet or moon.

The students worked extremely hard putting together print stories and video; to read reports from the RIS4E journalism students about their experience in Hawaii, visit:

For more information about RIS4E, visit