Copernicus can be seen with the unaided eye and is visible in detail using binoculars. It is one of the most prominent craters on the near side of the Moon–the big left eye if you’re imagining the face on the Moon. It measures ~58 miles (93 km) across and ~2.4 miles (3.8 km) deep with steep terraced walls, a cluster of central peaks, and frozen rocky ponds of impact melt on its floor. It is a relatively fresh crater, demonstrated by the bright spray of pulverized ejected rock that covers the darker, underlying terrain.

Copernicus is an important marker in our understanding of lunar chronology and history. It is one of the key overlapping landforms used to estimate the relative ages of different regions on the lunar surface. Because younger features lie on the top of older surfaces, researchers have a good idea of their relative ages. But determining absolute ages and actual dates requires returning samples that can be examined in the lab. That was one of the major goals of the Apollo 12 mission, which landed on one of Copernicus’ ejecta rays. Samples returned by the Apollo 12 astronauts allowed the age of Copernicus to be pinned down to 800 million years. 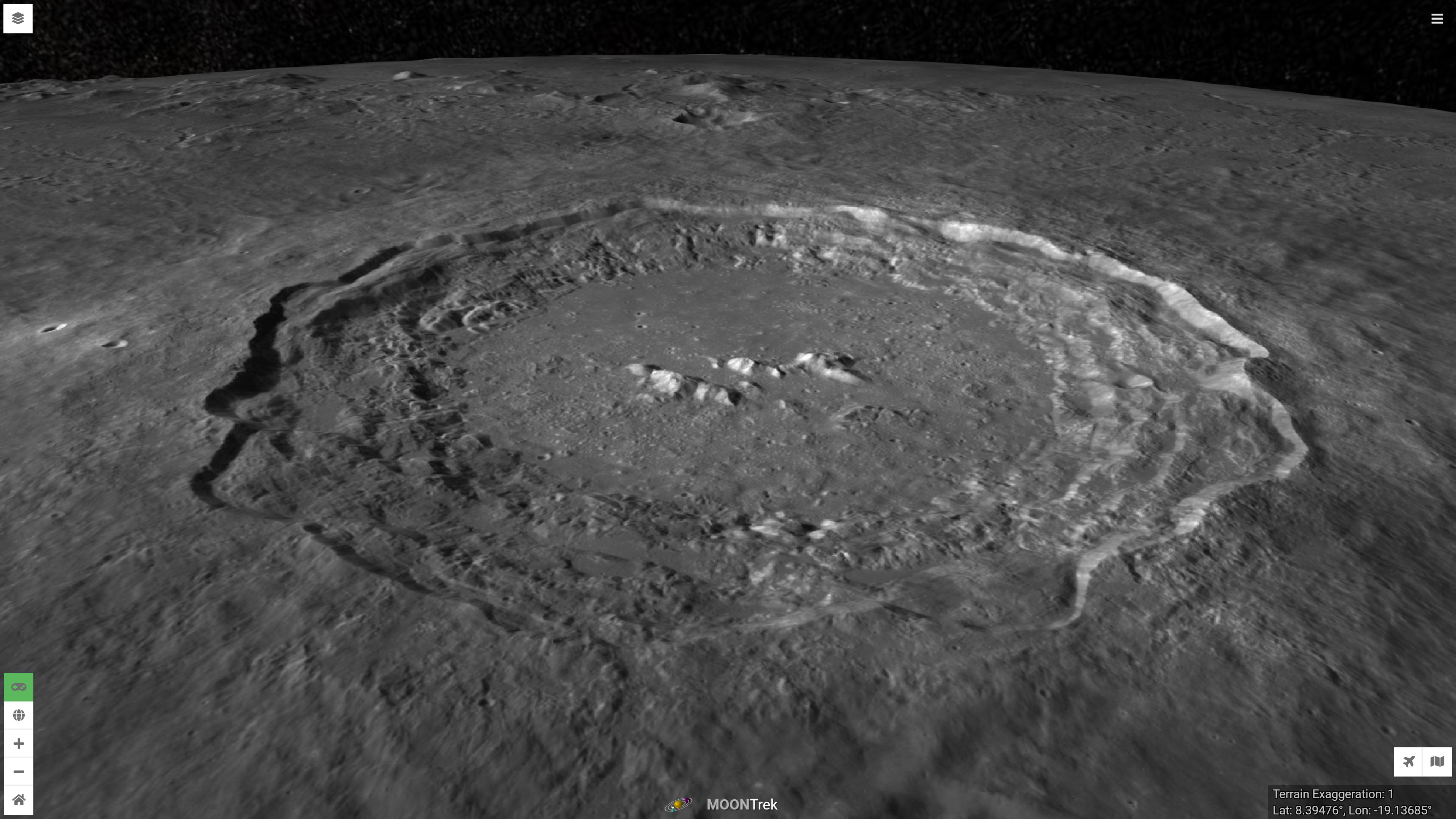 Copernicus Crater offers possible clue to dramatic string of events across the Moon, the Earth, and beyond.

A new study published in July, 2020 by researchers from Osaka University using data from Japan’s Kaguya lunar orbiter, estimated the ages of 59 lunar craters greater than ~12.5 miles (20 km) wide. They used the standard method of counting small impact craters that have accumulated on top of larger craters over time to estimate a crater’s age. To their surprise, they found 8 of these 59 craters, including Copernicus, might have formed at the same time!

Copernicus was formed by a big impact that scattered debris 800 km from the crater, and impacts that size are generally very rare events, so it seemed like the impacts might be related to a single event. Using the 800 million year age of Copernicus, they identified one possible common source– the remains of a disrupted large asteroid that can still be seen today as the Eulalia family of small asteroids. These are primitive, carbonaceous, and relatively water-rich asteroids.

They propose that the breakup of a giant asteroid showered debris on the Earth and Moon. But the breakup of this small world would not have only bombarded the Moon with large chunks, many smaller impacts would have occurred too, resulting in a temporary spike in the formation rate of small craters. This led the researchers to revise assumptions about how crater ages are calculated. Applying their new model that includes this spike in the rate, the researchers then found that the list of related craters doubled! The craters Saha E, Godin, Lowell, Stefan L, Das, Copernicus, Al-Khwarizmi K, Stevinus, Klute W, Zhukovskiy Z, Golitsyn, Milne N, Guthnic, Steno Q, Robinson, Harpalus, and an unnamed crater at 54S 161E all formed from the breakup of the Eulalia parent asteroid.

The researchers estimated that this shower of debris would have pummeled the Earth far worse than the Chicxulub impact that wiped out the dinosaurs about 634 million years later. While these impact craters are still visible on the Moon, any scars here on Earth would have been erased long ago by erosion and plate tectonics. But some clues may still remain. The fossil record on Earth shows this massive meteoroid shower shortly precedes the Cryogenian period. This is the time of the greatest ice ages known to have occurred on Earth, dramatic changes in the Earth’s environment, and significant changes to biology on Earth. That such a great meteoroid shower would cause overwhelming changes to life and the environment on Earth seems quite reasonable.

For now, you can use Moon Trek to examine the wonders and beauty of Copernicus Crater, explore its possible sibling craters on the Moon, and use Ryugu Trek and Bennu Trek– the two newest portals in the Solar System Treks family–to examine some of the material that may have altered the face of the Moon and changed the course of evolution here on Earth.