The Dusty Environment of Near Earth Asteroids

Researchers from Southwest Research Institute and the University of Colorado Boulder used recent LADEE/LDEX measurements of the lunar dust cloud to calculate the dust distributed around any airless body near Earth. The research was recently published in the October issue of the Astrophysical Journal.

When meteorites hit the surface of an airless body they cause plumes of dust to kick up from the surface. In fact, this process occurs on all airless bodies throughout the solar system. The very same meteoroid sources that produce impact ejecta on the Moon produce comparable ejecta on near-Earth asteroids.

While the Moon retains a large fraction of its impact-ejected dust, asteroids have less gravitational pull and leave behind their debris trail as interplanetary dust. These grains carry valuable information about the chemical compositions of their parent bodies that can be measured via in-situ dust detection. 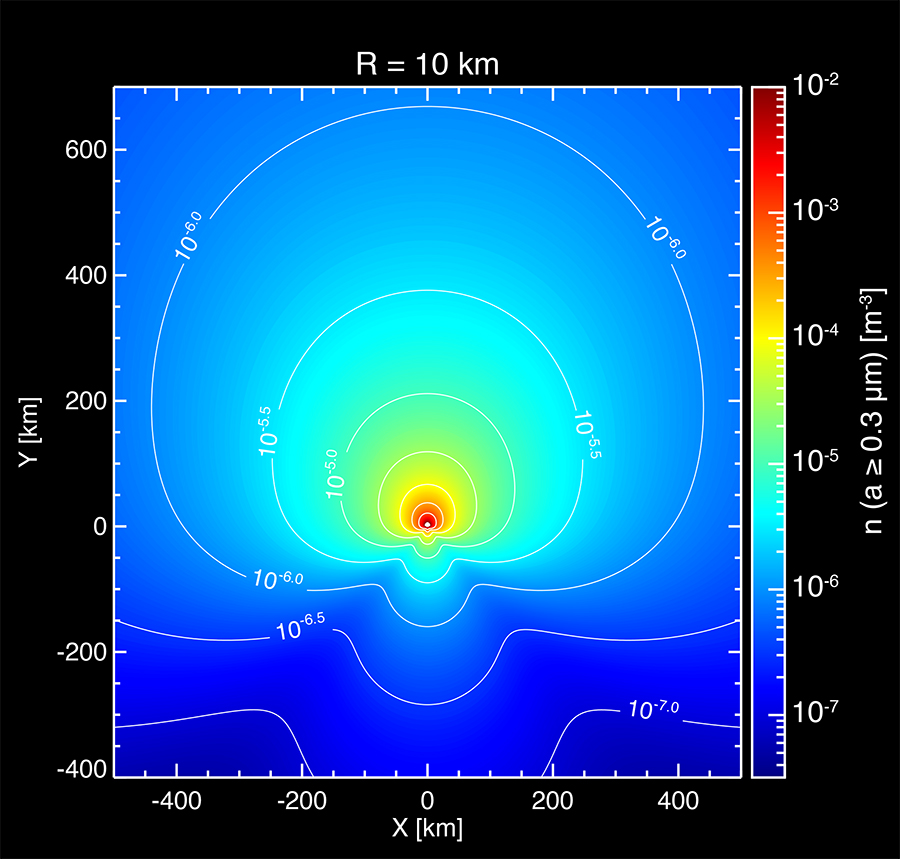 Dust density distribution in the ecliptic frame for grains with a ≥ 0.3 μm above a body with R = 10 km. The asteroid’s orbital motion is in the +y direction. Credit: J. Szalay/SwRI

Several NASA missions like Stardust, OSIRIS-Rex, and LADEE have been sent to measure or collect dust particles from comets, asteroids and the Moon. Future in-situ dust measurements could also collect valuable information about the Earth’s local dust environment. A spacecraft that returned dust samples to Earth could greatly advance our understanding of the chemical makeup of these objects, and provide complementary data to confirm the conclusions of remote sensing spectral observations of these bodies.

The researchers found that spacecraft flying by asteroids would collect many times more dust impacts by transiting ahead of the body’s orbital direction compared to behind the asteroid. Meteoroid impacts are not always constant or evenly distributed—known meteoroid showers tend to be rather directional—so the dust clouds around airless bodies are not the same in all directions.

The team was able to characterize these dust clouds and determine the rate at which a spacecraft would impact dust particles during a flyby of a near-Earth Asteroid.

Total number of impacts per square meter and predicted dust density (a ≥ 0.3 μm) for spacecraft flybys as a function of distance from closest approach and impact parameter (b) for a body with R = 10 km. Contours are logarithmically spaced in half decades of m−3. Credit: J. Szalay/SwRI

“Dust detectors can make valuable measurements near large asteroids. With an LDEX-type instrument, or an aerogel collector similar to that of the Stardust mission, a spacecraft could sample the chemical composition of an asteroid’s surface without having to land on the target body. The results of this study can be used to optimize future missions to an airless body to maximize the science return while minimizing the hazard of dust impacts,” said the paper’s first author, Jamey Szalay.