The Great American Eclipse of 2017

Brad Bailey, Associate Director for science at NASA SSERVI, watched a partial eclipse with Vice President Mike Pence at the U.S. Naval Observatory in Washington. A filter was placed on the 130+ year old telescope for safe viewing. In Washington, the Moon would cover only ~81.12 percent of the Sun. 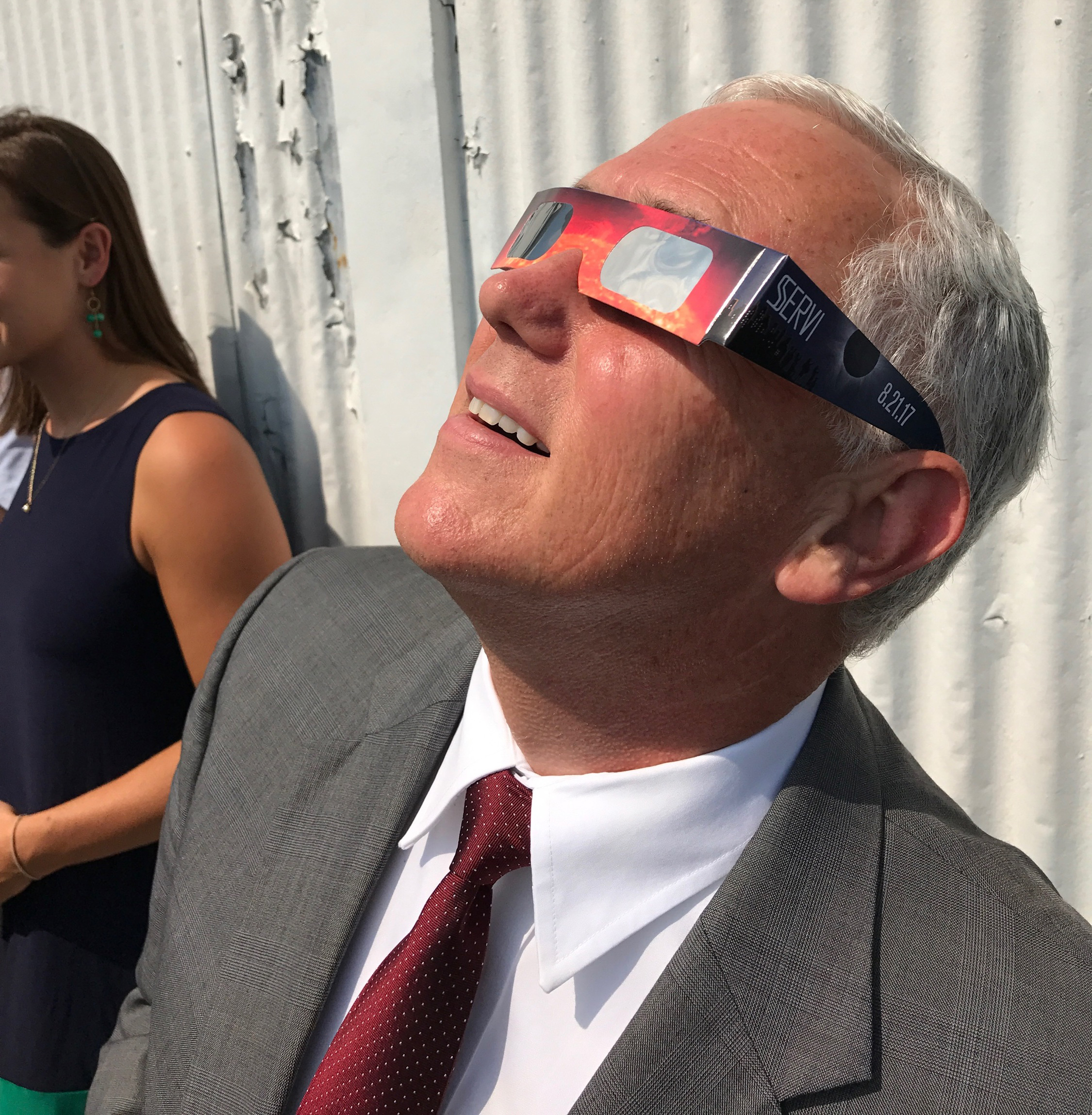 SSERVI staff also supported Solarfest in Madras, Oregon, and witnessed the eclipse from Rain Shadow Ranch just outside of town. The ranch lies on the eastern rim of Lake Simtustus, in full view of Mt. Jefferson, Mt. Hood, and the Cascade Mountain Range. The smoke from Oregon wildfires had cleared on the morning of the eclipse, and the ranch offered a marvelous clear sky.

Viewing the 2017 Eclipse via Pinhole Camera effect. As sunlight passes through the holes in this straw hat, the eclipse phases can be seen in the tiny crescent moon shadows. Video Credit: NASA/Teague Soderman. Special thanks to Irene Miranda.

As the partial eclipse became deeper, the Sunlight became more faint. The sky took on an eerie daytime twilight, colors appeared washed out, and the temperature dropped considerably. Two-thirds of the Sun’s radiation is in the form of heat, and as more of the Sun’s disc was obscured by the Moon, more of the heat was blocked as well.

Night seemed to come mid-morning, as the Moon’s dark shadow (or umbra) moved from west to east across the Earth. We saw birds flocking back to their nests to sleep, believing that night was falling! We watched the Moon shadow sweep down the flanks of Mt. Jefferson and race across the high desert as total darkness occurred. The Moon’s shadow moved very fast across the Earth, faster than the speed of sound, over a thousand miles per hour! Looking west along the eclipse path, the Moon’s shadow was visible as a dark, diffuse beam, reaching down through the sky from space, extinguishing the blue glow of the daytime sky, darkening the clouds and mountains off in the distance as it headed our way! Just before totality, the brightness of the sky dimmed to the point where we could see the brightest stars. The bright planets Mars and Mercury also became visible.

Suddenly, the Sun was replaced by a black hole in the sky as the Moon completely obscured the bright solar disc. We took off our eclipse glasses and saw the chromosphere of the Sun in the first few seconds following the onset of totality. This was a red-colored region of the Sun’s atmosphere, visible along the leading edge of the Moon’s motion. Most spectacular of all was the solar corona, the wispy outer layers of the atmosphere of the Sun, streaming out from the Sun in all directions. This glorious solar feature is one of the rarest sights in nature, and is only naturally visible during totality. We stood in a deep stage of twilight, about as bright as a night under a full Moon appears, and were awestruck. The sunlit areas beyond the umbra created a colorful daytime “sunset” visible on the horizon all around us.

The solar corona is one of the most elusive sight in nature. It’s widely agreed that no photo or videos can do it justice. There have historically been great difficulties in photographing this wonder, since the mere camera lens cannot capture the extraordinarily intricate detail visible to the human eye. However, astounding photographs of the Sun’s corona have been captured. 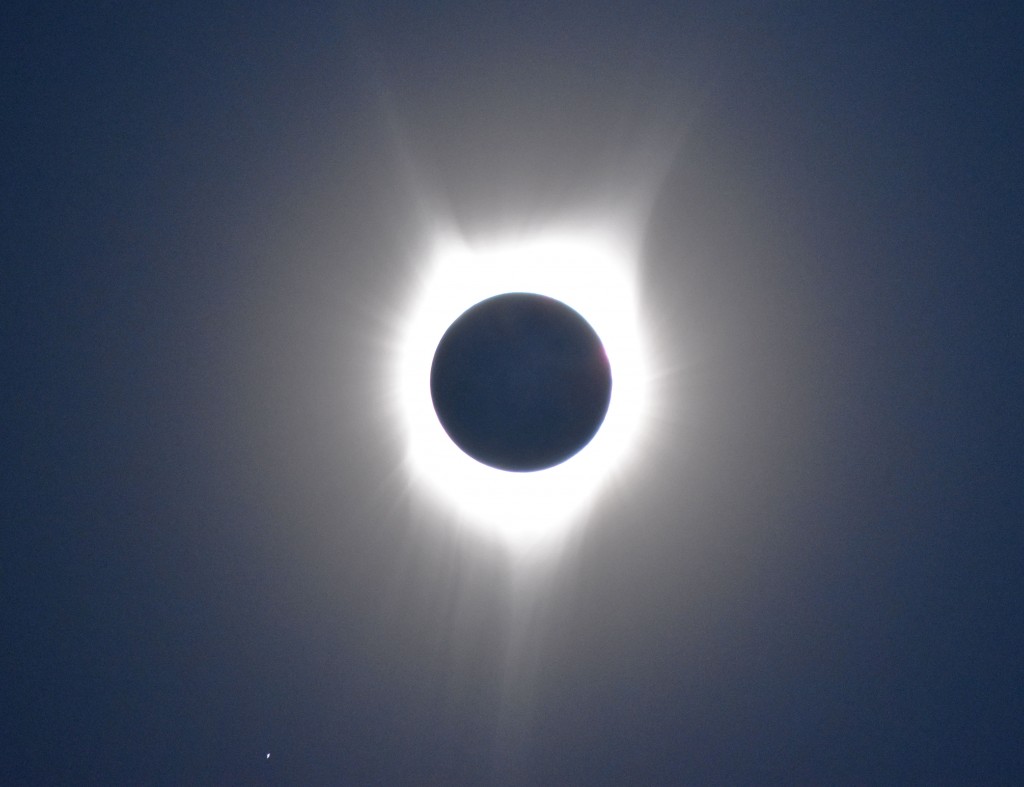 Photo of the Sun’s corona during the total eclipse over Madras, OR. Credit: NASA/David Morrison

As the phase of totality drew to a close, the reddish flames of the chromosphere reappeared along the receding edge, signaling the imminent end. The bright sliver of the Sun appeared again, and the phenomena ran in reverse, but the show was not over! We put our eclipse glasses back on and witnessed other interesting phenomena just after totality. We saw the diamond ring effect– a dwindling patch of bright sunlight still visible as the Sun reappeared and the ghostly shadow of the Moon retreated.

A large piece of white poster board provided enough contrast to see shadow bands just before and after totality. At this point, all that remained of the Sun was a tiny sliver of brilliant light that actually “twinkled” like a star through the windy layers of the Earth’s atmosphere. Sunlight passed through these rolling and boiling layers of turbulent air, producing alternating dark and light bands on the board’s surface, similar to the way sunlight looks as it dances along on the bottom of a swimming pool.

We also saw the famous Baily’s beads along the dwindling edge of the Sun. This happens because the limb of the Moon is not perfectly smooth, but has jagged mountains, and the bright sunlight pours through the valleys between these lunar mountains, which is visible as a broken ring of sunlight, with blazingly bright “beads” of the Sun’s surface blinking on and off as the Moon passed over the Sun.

The Moon’s shadow moved off from the landscape, and the sunlight quickly returned along with the heat of the day. This was the egress of the eclipse, and we continued to watch the partial eclipse for another hour or so, as the Moon moved out of alignment with the face of the Sun.

A total solar eclipse is widely regarded at the ultimate astronomy event, and the greatest natural phenomenon of any kind. It was not just visual, it was a powerful, emotional and physical experience. Even calm, level-headed individuals were deeply moved by the experience of totality. Many considered the total eclipse of the Sun to be a mystical, spiritual experience, perhaps the greatest spectacle that can be seen on the Earth. Even deep partial solar eclipse are nothing like a total eclipse. There is simply nothing else in the world like a total solar eclipse, and it is unlike any other type of experience one can have. We were hooked and have become die-hard eclipse chasers ourselves!

Watch a short video of the eclipse as it progresses to totality: