A Lunar Book for the Visually Impaired 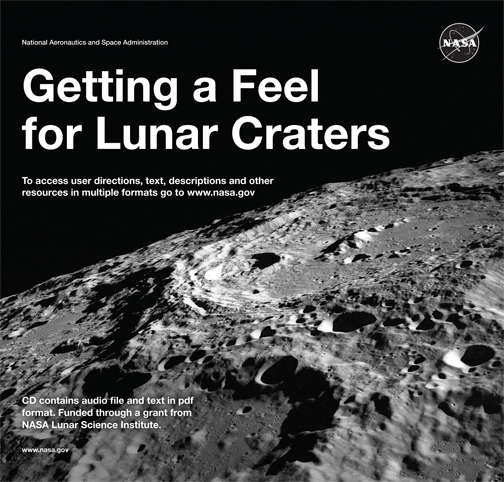 The book “Getting a Feel for Lunar Craters” was created with the NLSI and features tactile diagrams of the lunar surface designed to educate the blind and visually impaired about the wonders of Earth’s moon. David Hurd, a space science professor at Edinboro University of Pennsylvania, Edinboro, Pa., is the book’s author. He and tactile engineer John Matelock began creating tactile astronomy tools after a student with a visual impairment signed up for Hurd’s introductory astronomy course. Cassandra Runyon, a professor at College of Charleston, Charleston, S.C. and Hurd previously produced “A Tactile Guide to the Solar System with Digital Talking Book” for NASA.

Note: the first few reprintings of this publication have run out. Here you can download the text-only version or audio file of the book.

“NASA’s Lunar Science Institute is committed to the development of resources to bring lunar science into the world of those who cannot see. ‘Getting a Feel for Lunar Craters’ is one giant step for humankind, making lunar science visible through touch and sound,” said Yvonne Pendleton, director of the NLSI.

Update! There is now a story in 3 episodes where we describe the book “Getting a Feel for Lunar Craters.” H&T Correspondent Shawn Klein touches and describes the graphics as the book’s author Professor David Hurd and Host Dave Uhlman talk about the science of the moon. Click on a link below and the program will begin automatically in a new window.

Episode 1 The Birth of the Moon. In this episode we describe what the full moon looks like and we discuss how the moon was formed.

Episode 2 Craters Close-up. In this episode we describe craters and how they are formed. We describe one called Tyco which is located on the front, bottom half of the surface. It is a large circle with lines radiating in all directions from its center. These are formed from a meteor’s impact, explosion and the resulting debris.

Episode 3 Touch the Dark Side. In this episode we describe the side of the moon we can’t see. We also talk about a crater which is about ¼ the size of the moon that was only recently discovered. People refer to the “Dark Side” but we explain why that is not true. More accurately it is the far side. The moon is stuck in an orbit with the same side always facing earth. People had never seen it until we launched space probes to look at the back side. We reveal it all in this episode and tell you how you can feel the “Dark Side” for yourself.

Here are some comments from people who have received a copy of the book:

“Received today – what a fantastic publication. My mom loves it. Thanks to you, NASA and the Moon-maker.” — Walt

“I received the book yesterday and it’s wonderful. Thank you so much and please pass on our delight and gratitude with this resource. The look on my blind student’s face was priceless.” — Heather

“I received the book on Friday and I wanted to say thank you and let you know it’s an amazing piece of work. It was well worth the wait! I’m giving it to a friend who is sight impaired and I know that she will enjoy this book for years to come.” — Anne